Suspect was described as having ‘cables hanging out of his clothes’ 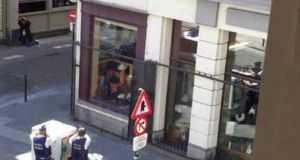 Armed police in Brussels detain a man. Photograph via Twitter

A security alert in Brussels sparked by reports of a man having “cables hanging out of his clothes” has been declared a false alarm.

The man was surrounded by armed police for several hours after the alert was raised near a library adjacent to Royal Monnaie Opera. A bomb squad was kept on standby nearby.

“The man was spotted with a thick winter coat and wires were visible,” said Police Commissioner Christian De Coninck.

The incident took place near Grand Place, and led to the evacuation of a number of buildings in the area.

The man is now being spoken to by police.

Streets in the area were cordoned off and public transport diverted.

The operation in a major shopping district comes a day before Belgium’s national holiday, which will see a number of events take place across the capital.

Belgian prime minister Charles Michel said last week in the wake of the Nice attacks that security would be heightened for the July 21st celebrations.

Four months after a series of airport and metro attacks left 31 people dead, Belgium remains at a high state of alert.

Earlier on Wednesday a supermarket carpark was closed in the Brussels’ suburb of Waterloo after a suspect bag was found. It was later deemed to be a false alarm.