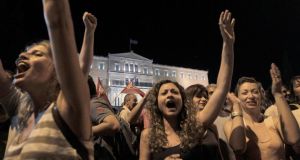 Supporters of the No campaign react during the results of the referendum in Athens. Photograph: ORESTIS PANAGIOTOU/EPA

Greece’s ruling Syriza party hailed the overwhelming result as a triumph for its anti-austerity stance, while recriminations among Greek conservatives led to the immediate resignation of the leader of the opposition.

With counting continuing last night, former prime minister Antonis Samaras announced he was stepping down as leader of New Democracy, which had called for a Yes vote. “Our party needs a new start,” he said in a televised address.

The opposition’s turmoil completed a triumphant day for Syriza, which won more than 60 per cent support for its call for a rejection of a bailout proposal from Greece’s international lenders. It said the result would strengthen its hand to secure a better deal from EU-IMF creditors after months of fraught negotiations on a financial aid package.

Finance minister Yanis Varoufakis said creditors planned from the start to shut down banks to humiliate Greeks and force them to make a statement of contrition for showing that debt and loans were unsustainable.

“As of tommorrow, with this brave ‘No’ the Greek people handed us . . . we will extend a helping hand towards our lenders. We will call on each one of them to find common ground,” Mr Varoufakis told reporters. “As of tomorrow, Europe, whose heart is beating in Greece tonight, is starting to heal its wounds, our wounds. Today’s No is a big Yes to democratic Europe.”

As Syriza supporters celebrated outside the parliament in Athens, the country was entering uncharted territory, with its banks closed and no clear path to new funding. Greece’s immediate fate lies with the European Central Bank, which may take its cues from European Union leaders as to whether it can keep emergency loans flowing to a country without the prospect of a bailout package.

“The negotiations which will start must be concluded very soon, even within 48 hours,” government spokesman Gabriel Sakellaridis told Greek television.

“We will undertake every effort to seal it soon.” Euclid Tsakalotos, the government’s chief negotiator, said talks could restart as early as last night.

Voting took place in extraordinary circumstances. Greek banks have been closed for the past week due to capital controls imposed to stem outflows of cash.

The banks are expected to run out of money within days unless the European Central Bank provides an emergency lifeline.

Meanwhile, commerce has slowed to a crawl and pension payments are being rationed. Greeks can each withdraw a daily maximum of €60, and there have been queues at cash machines.