Gazprom said to be blocking threats to its energy stranglehold 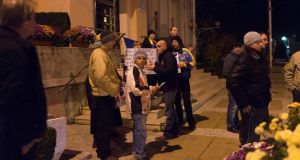 Vlasa Mircia, the mayor of the destitute village of Pungesti in eastern Romania, thought he had struck it rich when US energy giant Chevron showed up there last year and leased a plot of land he owned for exploratory shale gas drilling.

But the encounter between big business and rural Romania quickly turned into a nightmare. The village became a magnet for activists from across the country opposed to hydraulic fracturing, or fracking. Violent clashes broke out between the police and protesters. The mayor, one of the few locals who sided openly with Chevron, was run out of town, reviled as a corrupt sellout in what activists presented as a David versus Goliath struggle between impoverished farmers and corporate America.

“I was really shocked,” said the mayor, who is now back at his office on Pungesti’s main, in fact only, street. “We never had protesters here, and suddenly they were everywhere.” Pointing to a mysteriously well-financed and well-organised campaign of protest, Romanian officials including the prime minister say the struggle over fracking in Europe does feature a Goliath, but it is the Russian company Gazprom, not the American Chevron.

Gazprom, a state-controlled energy giant, has a clear interest in preventing countries dependent on Russian natural gas from developing their own alternative supplies of energy, they say, preserving a lucrative market for itself – and a potent foreign policy tool for the Kremlin.

“Everything that has gone wrong is from Gazprom,” Mircia said. This belief that Russia is fuelling the protests, shared by officials in Lithuania, where Chevron also ran into a wave of unusually fervent protests and then decided to pull out, has not yet been backed up by any clear proof. And Gazprom has denied accusations that it has bankrolled anti-fracking protests. But circumstantial evidence, plus large dollops of cold war-style suspicion, have added to mounting alarm over covert Russian meddling to block threats to its energy stranglehold on Europe.

Before stepping down in September as Nato’s secretary general, Anders Fogh Rasmussen gave voice to this alarm with remarks in London that pointed a finger at Russia and infuriated environmentalists. “Russia, as part of their sophisticated information and disinformation operations, engaged actively with so-called nongovernmental organisations – environmental organisations working against shale gas – to maintain dependence on imported Russian gas,” Rasmussen said. He presented no proof and said the judgment was based on what Nato allies had reported.

Feeding what environmental groups denounce as a frenzy of paranoia have been Russian actions in Ukraine. Russia’s president, former KGB officer Vladimir Putin, has deployed a powerful arsenal there dominated by stealth and subterfuge, first to annex Crimea in March and, more recently, to foment an armed separatist rebellion in the east.

Dirty game “It is crucial for Russia to keep this energy dependence. It is playing a dirty game,” said Iulian Iancu, chairman of the Romanian parliament’s industry committee and a firm believer that Russia has had a hand in stirring opposition to shale gas exploration across

eastern Europe. He acknowledged that he had no direct evidence to support this allegation, nor for an assertion he made recently in parliament that Gazprom had spent €82 million to fund anti-fracking activities across Europe.

“You have to realise how smart their secret services are,” he added. “They will never act in the spotlight.”

What has become a tide of protest against fracking in eastern Europe, where countries are most dependent on Russian energy, began three years ago in Bulgaria, a member of the European Union but far more sympathetic to Russian interests than any other member of the 28-nation bloc. Faced with a sudden surge of street protests by activists, many of whom had previously shown little interest in environmental issues, the Bulgarian government in 2012 banned fracking and cancelled a shale gas licence issued earlier to Chevron.

George Epurescu, president of “Romania Without Them”, a Romanian organisation that has played a major role in mobilising opposition to Chevron in Pungesti, said his group, set up in 2011 to protest against corruption, shifted its focus to the fight against fracking after it “found out about the shale gas problem” from Bulgarian activists.

Epurescu, who works at a Bucharest scientific institute, said his group gets no Russian or other outside funding beyond small donations from activists. Most of its money, he said, comes from his own salary. “As you can see, we don’t have much cash,” he said, sitting in the group’s ramshackle single-room headquarters, equipped only with a few old computers.

Romania is far less reliant on Russian energy than Bulgaria and other countries in the region, but a sharp expansion in domestic production would allow it to export energy to neighbouring Moldova and blunt an important Russian foreign policy goal.

Like Ukraine, Moldova has tilted away from Moscow toward the EU and has come under strong pressure, notably through gas prices, to stay within Russia’s economic and political orbit.

“Energy is the most effective weapon today of the Russian Federation – much more effective than aircraft and tanks,” Victor Ponta, the Romanian prime minister, said in an interview. Russia has generally shown scant concern for environmental protection and has a long record of harassing and even jailing environmentalists who stage protests. On fracking, however, Russian authorities have turned enthusiastically green, with Putin declaring last year that fracking “poses a huge environmental problem”. Places that have allowed it, he said, “no longer have water coming out of their taps but a blackish slime”.

Alexander Medvedev, the head of Gazprom’s export arm, has warned Europeans that they will never be able to replicate America’s success in extracting large amounts of gas through fracking because of Europe’s different geology and population density.

Russia’s view has so far turned out to be at least partly correct, with early predictions of enormous reserves in places like Poland crumbling in the face of disappointing results from test wells. Lithuania, another country that offered early promise, also turned out to be a dud because of protests and legislative changes that prompted Chevron to abandon a shale gas project there late last year.

Ukraine, which is thought to have large shale gas reserves, particularly in its war-ravaged east, has also fallen flat. Pro-Russian separatists in the east, who have otherwise shown no interest in green issues, have denounced fracking as a mortal danger.

None of this has stopped Gazprom from looking for shale gas and oil itself. Its Serbian subsidiary, Nis, is now exploring prospects in western Romania near the border with Serbia.

Unlike the Chevron project at the other end of the country, however, the Gazprom effort has stirred no mass protests.

Anca-Maria Cernea, a leader of a conservative political group in Bucharest that has exposed the prospect of a Russian connection, said that while no documents have been uncovered proving payments or other direct support from Russia, circumstantial evidence shows that “Russians are behind the protests against Chevron”. The protesters, she noted, included groups that usually have nothing to do with one another, like radical socialists, some with ties to the heavily Russian influenced security apparatus in neighbouring Moldova, and deeply conservative Orthodox priests. Russian media, she added, were curiously active in covering and fuelling opposition to fracking in Pungesti.

RT, a state-run Russian TV news channel aimed at foreign audiences, provided blanket coverage of the protests and carried warnings that villagers, along with their crops and animals, would perish from poisoned water.

Chevron’s work site at Pungesti is now empty. However, the company declined to say whether it had given up on Romania and was pulling out.

The mayor, Mircia, said he was sure Chevron had decided to leave. “They are going home,” he said. – (New York Times service)