Russian troops smash their way into Ukrainian base in Crimea 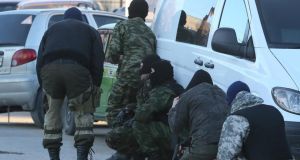 Russian troops smashed their way into a Ukrainian airbase in Crimea with armoured vehicles, automatic fire and stun grenades today, while Ukrainian forces abandoned a naval base after attacks by pro-Russian protesters.

The facilities at Belbek and Novofedorovka had been among the last still under Ukrainian control after Moscow’s armed takeover and subsequent annexation of Crimea, which has a majority ethnic Russian population and harbours one of Russia’s biggest naval bases.

Eyewitnesses said armoured vehicles had smashed through the walls of a compound at the Belbek airbase and bursts of gunfire and grenades were heard, making the takeover one of the more dramatic of Russia’s largely bloodless occupation of Crimea.

Russian forces had already seized Belbek’s airstrip and warplanes at the start of the crisis.

Colonel Yuliy Mamchur, the commander of the base, said a Ukrainian serviceman had been injured and that he himself he was being taken away by the Russians for talks at an unspecified location.

After the Russians entered by force, Col Mamchur told his troops he would inform the high command that they had stood their ground.

Many stood to take pictures of each other in front of the blue and yellow Ukrainian flag, which continued to fly over the base.

Asked if he thought he would return safely, Col Mamchur said: “That remains to be seen. For now we are placing all our weapons in the base’s storage.”

Earlier, an unidentified Russian officer with no rank insignia had gone to the fence to try to negotiate a surrender, but had been rebuffed by a Ukrainian officer with the words: “We have no documents from the Ukrainian president stating that this is Russian soil. Bring me such a document and we will leave.”

Ukraine’s naval base at Novofedorovka, near Sevastopol, was vacated after unarmed pro-Russian protesters attempted to force their way in, Ukrainian military spokesman Vladislav Seleznyov said in a Facebook post.

Mr Seleznyov also said Ukraine’s only submarine, the Zaporizhya, had been taken to Sevastopol’s Yuzhnaya Bay by Russian forces on Friday.

“The Ukrainian commander left the submarine, refusing to raise the Russian flag. It has been seized,” he said.

There have been few casualties since Russian forces started seizing control of military facilities in Crimea, though one Ukrainian serviceman was killed and two others wounded in a shooting in Simferopol earlier this week.

Yesterday, extravagant firework displays were staged in Crimea and Moscow to mark the formal unification of the peninsula with Russia, which Kiev and Western leaders refuse to recognise and have answered with sanctions.