A military helicopter on a rural training exercise in western Russia mistakenly fired rockets at a group of parked vehicles, knocking at least one person to the ground, footage posted by Russian news sites and on social media showed. Video: Reuters 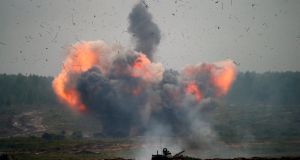 Russia’s “Zapad” war games have come under further scrutiny after its military admitted that a helicopter had accidentally fired on bystanders, and senior Polish and Estonian officials added their voices to widespread western concern over the drills.

Poland’s defence minister, Antoni Macierewicz, claimed that Zapad (“West” in Russian) would not end as expected on Wednesday, but would continue and include training in the use of nuclear weapons.

Meanwhile Riho Terras, the commander of Estonia’s defence forces, said Russia was staging Zapad with neighbouring Belarus to undermine the independence of the latter’s military and prepare for armed intervention if it sought to escape Moscow’s influence as Ukraine did in 2014.

Russia and Belarus insisted the drills were defensive and would involve fewer than 13,000 troops, despite claims from western states and senior Nato officers that about 100,000 soldiers would take part.

The exercises, involving tanks, artillery, aircraft, warships and missiles, took place close to the Russian and Belarusian borders with Poland and the Baltic states, which have been particularly alarmed by the Kremlin’s annexation of Crimea in 2014 and its fomenting of a war in eastern Ukraine that has killed 10,000 people.

A Russian news website published extraordinary footage of a low-flying Ka-52 “Alligator” helicopter gunship firing a rocket that exploded close to a group of parked vehicles and at least two bystanders.

Russia’s military said the missile was launched as result of a technical malfunction, but insisted that reports of “salvos fired at a crowd of journalists and a large number of badly injured people are either an intentional provocation or someone’s personal stupidity”.

It is not clear if anyone was hurt in the incident, which the military denied took place on Monday, when Russian president Vladimir Putin and dozens of foreign observers and reporters watched one phase of the war games at a firing range in western Russia.

Mr Macierewicz told Polish television that Zapad was “the biggest and most aggressive and multifunctional of all Russian exercises in the last 30 years”, and claimed they would not end on Wednesday “but continue and involve training in the use of nuclear weapons”.

In Estonia, Gen Terras said Zapad and similar drills are intended “to tie the armed forces of Belarus as closely as possible to the Russian armed forces”.

“The goal is to cripple Belarus’s independent military capability . . . Similarly to Ukraine, Russia is planning on taking military steps against Belarus if the political situation in Belarus changes,” he told Estonia’s public broadcaster.

“We’re not planning to attack anyone,” he said. “Let’s wait and see what they say [in the West] when all the armed forces, Russian and our own, end up back at their permanent bases.”

Greece urged to evacuate ill children from refugee camp 18:58
Serbia and Kosovo urged to compromise in bid by US to end impasse 18:53
Man tested for symptoms linked to coronavirus in Belfast 18:38
Netanyahu denounces Iran as anti-Semitic at Holocaust forum 18:35
Actor alleges Weinstein raped her: ‘I couldn’t fight anymore’ 18:03