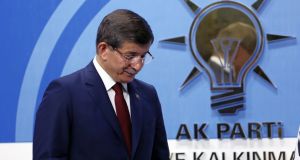 Turkish politics and a deal with the European Union on migrants are likely to face testing weeks following the announcement that prime minister Ahmet Davutoglu is to step down.

The former foreign minister said his decision was taken “out of necessity” and that he would not seek re-election at an extraordinary meeting of the ruling AK Party set to take place in the coming weeks.

“I have worked with my heart and soul. There was no fallout from the AK Party structure during my chairmanship,” he said on Thursday after a meeting of the party’s central party executive in Ankara.

In his comments, Mr Davutoglu played down reports of an apparent split with President Recep Tayyip Erdogan. However, his resignation comes a day after a 90-minute meeting with the president, brought forward by several days, during which their differences appear to have been unbridgeable.

Davutoglu’s departure follows a decision by the AK Party last Friday to remove the prime minister’s power to appoint local and regional AK Party leaders, a move thought to have been urged by Erdogan’s allies. Recent weeks have seen the emergence of a divide between Davutoglu and Erdogan, the latter of whom who holds constitutionally almost no parliamentary, party or government power.

Davutoglu is believed to have been cool on the president’s persistent push to change Turkey’s constitution from a parliamentary to a presidential system that would allow the latter govern the country unopposed.

Davutoglu’s resignation may also have serious consequences for the EU. It was he who negotiated deals with European leaders over the past several months to crack down on the flow of refugees and migrants from Turkey into Greece. Davutoglu also served as a buffer between Europe and Erdogan, whose comments at times have been critical of Europe, which he accused of failing to hand over the €3 billion promised to Turkey last October to support Syrian refugees.

Prior to the prime minister’s resignation, former Swedish diplomat Carl Bildt warned that Davutoglu’s position at the top table of Turkish politics was crucial to the EU-Turkey migrant deal.

“If he leaves, bets are off,” Bildt posted on Twitter on Wednesday, referring to rumours of Davutoglu’s departure.

In a sign of Ankara’s importance to stability in Europe, German chancellor Angela Merkel has visited Turkey three times over the past six months to secure better ties with the country’s leadership. But with Davutoglu expected to be replaced by a figure reflecting Erdogan’s political and policy stances, ties with Europe may now suffer.

As Turkey’s foreign minister from 2009 to 2014, Davutoglu was seen as a bookish and cordial diplomat, whose role became dominated by the revolutions and conflict that spread across the Arab world in 2011. The war in Syria led to millions fleeing into Turkey, and more than a million more using Turkey as a transit route to EU member state Greece this year and last.

Though leading figures within the AK Party are split between hardline Erdogan supporters and others who see the party moving away from the social conservatism that made it hugely popular with millions of Turks, Davutoglu’s resignation is seen as a win for hardliners.

Last week, the speaker of the Turkish parliament and a leading AK Party figure, Ismail Kahraman, called for a religious constitution to be put in place despite Davutoglu’s past insistence that a new constitution would ensure that “the state is at an equal distance from all faith groups”.

The leader of Turkey’s main opposition party said the prime minister’s resignation was the will “of one person”.

“Davutoglu’s resignation should not be perceived as an internal party issue,” said Republican People’s Party leader Kemal Kilicdaroglu. “All democracy supporters must resist this palace coup.”