Message from leaders is clear: EU will tighten security and focus intensely on growth 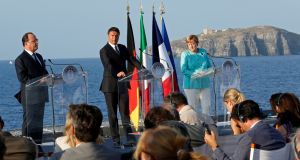 Speaking from the small Mediterranean island of Ventotene, near Naples, on Monday, Italian prime minister Matteo Renzi, German chancellor Angela Merkel and French president François Hollande all sounded a defiant, post-Brexit vote of confidence in the European Union project. We respect your decision to opt out, dear Britain, but we will be steaming ahead without you, was the theme of their similar statements.

Mr Renzi set the tone, saying at a joint press conference:  “Many thought that after Brexit, Europe, the EU, was finished. That is not so. We respect the choice of the British people but we want to write an important page for the future.

“And for that reason, internal security, external security, the battle for a common defence, more collaboration between intelligence services, greater integration between national defence industries, a project for a European Security Community . . . all these are absolute priorities . . .”

Mr Renzi opted to hold the meeting in the symbolic venue of Ventotene because this is the small island where men like Italian socialist and state president Sandro Pertini and the influential European federalist Altiero Spinelli were held prisoner by the Mussolini Fascist regime. Between 1941 and 1942, Spinelli wrote his Manifesto for a Free and United Europe on the island, a document fundamental to the European ideal.

Mr Renzi explained: “We choose to have this meeting in a symbolic place by way of sending a message to young people . . . Over there on the island of Santo Stefano, you can see the prison . . .”

Ventotene is a small island, 1.5km wide and inhabited by 700. It was impossible to hold the summit press conference on the island itself, so it was held on an aircraft carrier, the Garibaldi, anchored just off the island. Mr Hollande pointed out the Garibaldi itself was an expression of the best European values since the vessel plays a fundamental role in the EU’s Operation Sophia, which aims to neutralise smuggling routes which have seen more than 100,000 migrants land on the shores of Italy this year alone.

Referring to Spinelli, Mr Hollande said it was thanks to men like him the European ideal was launched in the immediate post-war period.  He pointed out Spinelli had promoted the notion of a European defence force, something “which was not well-received at the time but which now assumes a fundamental characteristic in the face of [terrorist] threats and wars”.

Dr Merkel said it had been important to appreciate “something of the EU’s roots” by visiting Spinelli’s grave. She said that, in the wake of Brexit, it was the mission of the leaders “to give people a sense of a secure and vibrant Europe”.

Acknowledging Brexit has created economic uncertainty, she said the EU needed “a new impulse”, adding she would be visiting several member. “We respect Great Britain’s decision but the other 27 EU member countries have got to plan for a Europe that is both secure and prosperous. I am very glad that we have Brussels, but I am also glad to visit various member states to remind them we are an important community . . . which intends to give people work and a future . . .”