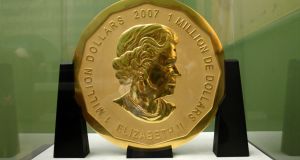 The gold coin known as the “Big Maple Leaf” on display at Berlin’s Bode Museum in 2010. It was stolen from the museum on Monday. Photograph: Marcel Mettelsiefen/AFP/Getty Images

It was about 3.20am when a smiling Queen Elizabeth was disturbed by visitors and carried out the window.

After racing along an adjacent rail bridge in the crisp spring air, possibly in a barrow, she abseiled down into a nearby park and was bundled into the getaway car. Across the road, Germany’s Chancellor Angela Merkel slept on.

What sounds like a royal kidnap nightmare was in fact a daring heist at Berlin’s Bode Museum: the theft of a 100kg, 52cm wide gold coin bearing the likeness of the British monarch. Two days before Brexit, a little, big piece of Britain has vanished from Berlin.

The massive coin was minted in Canada in 2007 and contained €3.7 million worth of gold by market prices. The theft, worthy of Thomas Crown himself, has left Berlin museum directors red-faced.

On Monday morning, during a night-time break in traffic, thieves climbed on to the cross-town rail bridge that runs down the side of the Bode Museum, on the city’s museum island.

They forced open a side window into the security staff changing room, apparently without triggering any alarm.

Inside the museum, they raced 150m down a passage into the corner cabinet housing the coin, known as the “Big Maple Leaf” for the Canadian national symbol on the opposite side to Queen Elizabeth’s profile.

Using “brute force”, they smashed their way into the coin’s reinforced glass display case and were long gone by the time the alarm was raised at about 4am.

Michael Eissenhauer, general director of Berlin’s state museums, expressed shock that thieves had bypassed the security system, but relief that no one was hurt. “Now we hope that the valuable coin will be returned to the museum undamaged,” he said.

Suggestion of inside help

Police spokesman Winfrid Wenzel said the speed and precision of the raid – using only a trolley, a ladder and a cable – indicated there was help from the inside.

He said that, rather than return to the Bode Museum’s 500,000-piece coin collection, one of the largest in the world, Queen Elizabeth is more likely to end her days in a furnace.

“Because of its value,” he said, “we have to assume the thieves want to melt it down.”

Inside the museum on Tuesday, as two visitors gazed at the empty parquet floor where the coin once stood, a third read aloud an adjacent display of Bertolt Brecht lyrics about the “invigorating effect of money”.