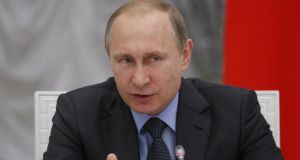 US President Barack Obama spoke with President Vladimir Putin of Russia on Thursday in their first direct contact in four months as the United States and Russia try to manage their conflict over Ukraine while still working together on other issues like Syria and Iran’s nuclear program.

Mr Putin initiated the call, the first between the estranged leaders since February, White House officials said. He brought up the war against the Islamic State in Syria and the two leaders agreed to have US secretary of state John Kerry meet with his Russian counterpart foreign minister Sergey Lavrov to discuss how to counter the spread of radicalism in the Middle East.

They also discussed the Iran talks in advance of next week’s deadline for an agreement.

But US officials said that Mr Obama focused on the continuing separatist war in Ukraine fomented by support from Moscow and pushed Mr Putin to abide by a shaky diplomatic agreement known as the Minsk accord.

Violence has flared in recent weeks even as Russia failed to drive a wedge among the members of the European Union who agreed to renew economic sanctions on Russia for another six months.

“President Obama reiterated the need for Russia to fulfill its commitments under the Minsk agreements, including the removal of all Russian troops and equipment from Ukrainian territory,” the White House said.

The Kremlin said Mr Putin agreed to have his deputy foreign minister, Grigory Karasin, talk with Victoria Nuland, an assistant secretary of state, about the fulfillment of the Minsk accord.

Mr Putin’s decision to call Mr Obama and focus on Syria and Iran may reflect a desire to assert his continuing importance on the world stage despite Russia’s isolation and failure to break the Western consensus on sanctions.

The US and Russia have been at odds over Syria. Moscow supports the government of President Bashar Assad, and Mr Obama has called for his resignation. US officials hope Mr Putin may see the rise of the Islamic State as enough of a threat to now be willing to apply pressure on Mr Assad, but they also suspected his renewed interest in the issue may be a way of distracting from Ukraine.