Protesters rally in Rome against ruling on Berlusconi 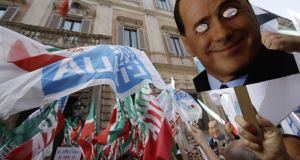 Protesters gather during a demonstration organised by the PDL party for its leader Silvio Berlusconi in front of his Rome residence yesterday. Photograph: AP Photo/Andrew Medichini

At the end of a hot and bothered weekend which saw talk of “civil war”, supporters of former prime minister Silvio Berlusconi gathered last night in Rome to protest against last week’s supreme court ruling in which he was adjudged guilty of tax evasion.

Although Mr Berlusconi himself had not been scheduled to address his supporters gathered in front of his Rome residence of Palazzo Grazioli, the “great communicator” could not resist the call of the “popolo”, saying: “I feel that I have to remain engaged in politics for a while yet, with more enthusiasm and ever more passion . . . to fight our battle for freedom and democracy . . .”

Mr Berlusconi also said that the presence of his supporters made up for the “sufferings” of the last few days, while he suggested that his PDL party would not be pulling out of the Letta coalition government.

It was senior PDL figure Sandro Bondi, a man who has served as a cabinet minister under Mr Berlusconi, who inflamed an already volatile situation when he suggested on Saturday that unless some form of “solution” is found for Mr Berlusconi’s predicament, then “Italy runs the risk of a civil war whose outcome would be highly unpredictable”.

Many believe the “solution” the PDL has in mind might be some form of amnesty or even a presidential pardon.

‘Irresponsible’
It says much about the current climate that his words were greeted with total approval by many of his PDL colleagues, who continue to see Mr Berlusconi as the victim of a 20-year-long miscarriage of justice. That comment, however, did not meet with the approval of state president Giorgio Napolitano, who dubbed them “irresponsible”.

Legal experts point out also that it would be constitutionally incorrect for Mr Napolitano to grant a pardon to someone who has already been convicted in another serious case. In late June, Mr Berlusconi received a seven-year sentence and a lifelong ban from public office for the crimes of “abuse of office” and “involvement in underage prostitution” in the so-called “Rubygate” trial.

Mr Berlusconi is currently appealing that ruling but, in the meantime, he also faces trial in three other cases. While the tsunami waves crash around him, PD prime minister Enrico Letta fights a rearguard action to save his 100-day old, utterly fragile PD-PDL coalition government.