Francesco Schettino accused of being an ‘able idiot’ in Tuscan court 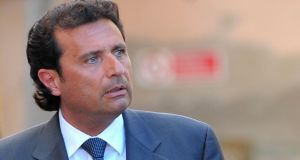 Costa Concordia captain Francesco Schettino. Prosecution in the captain’s trial for multiple manslaughter and causing the shipwreck of the luxury liner has recommended a prison sentence of 26-years. Photograph: Tiziana Fabitiziana/AFP/Getty Images

“May God have pity on Schettino because we cannot.”

With those words, the public prosecution asked that a 26-year prison sentence be imposed on Francesco Schettino, the captain of the luxury liner Costa Concordia, which ran aground off the island of Giglio in January 2012 with the loss of 32 lives.

Summing up his case in court in Grosseto, Tuscany, public prosecutor Stefano Pizza offered a damning portrait of the captain, who stands accused of multiple manslaughter, of causing a shipwreck and of having abandoned his ship before many of the stricken passengers, saying:

“Schettino is a reckless optimist, an able idiot . . . and someone who totally over-estimates his own ability . . .”

Mr Schettino is accused of having needlessly sailed the 1,000 feet long Concordia, with more than 4,000 crew and passengers on board, too close to land. It is argued that he did so as an act of “bravado”, intended to impress friends and colleagues.

Magistrate Maria Navarro, the public prosecutor who asked for the sentence of 26-years and three months, said that Mr Schettino had “lied repeatedly and shamelessly” during the trial. She also accused him of attempting to offload blame on co-defendants as she argued that over the last year, Mr Schettino had given a number of in-depth interviews to media sources in which he had given “his own incorrect version of events”.

Finally, the magistrate said that Mr Schettino had even given a lecture last year at Rome’s La Sapienza university on how to handle a panic situation. For its part, the prosecution argues that had Mr Schettino behaved correctly after the ship collided with rocks off Giglio, then no lives would have been lost.

The prosecution lists a whole catalogue of what they allege to be fatal errors on the part of the captain. They allege that he was not using proper maritime maps, the ship was travelling too fast, he turned up late on the bridge accompanied by a group of people who distracted the crew, he issued confused and contradictory orders. He had trusted his intuition when sailing far too close to land, and, worse still, he had abandoned the ship before many of the passengers had got off.

“The captain’s duty to be the last person off the ship is not just an obligation dictated by ancient maritime rules, it is also a legal obligation intended to limit the damage to those on the ship,” said prosecutor Stefano Pizza.

Welcoming the prosecution’s conclusions, the consumers’ federation Confconsumatori upped the ante when commenting:

“We share the prosecution’s request for an exemplary sentence, one that reflects the gravity of Schettino’s conduct and we trust that the court will also instigate civil and patrimonial proceedings of equal exemplarity and severity not only against Schettino but also against his employer, Costa Cruises. ”

The trial is ongoing, with defence due to sum up its case prior to sentencing, which is not expected before mid-February.