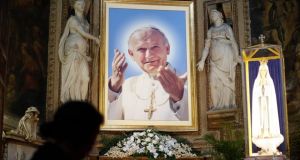 A woman prays in front of a painting depicting Pope John Paul II in a church in Rome yesterday. On Sunday, Pope Francis will canonise late Pope John Paul II, who reigned from 1978 to 2005, and Pope John XXIII, who was pontiff from 1958 to 1963 and called the Second Vatican Council. Photograph: Reuters/Max Rossi

The postulator for the sainthood of Pope John Paul II, due to be canonised next Sunday along with Pope John XXIII, yesterday defended the ultra- rapid process that will see the Polish pope confirmed a saint in record time, just nine years after his death in 2005.

Speaking at a Vatican press conference yesterday, Msgr Slawomir Oder said: “This cause followed the normal timetable; the only exception was the very fast beginning, something which obviously began with those cries of Santo Subito (make him a saint now) in Piazza San Pietro at his funeral . . .”

Msgr Oder conceded “negative opinions” about John Paul II had come before the Congregation for the Cause of Saints during the canonisation process. In particular, one issue considered was John Paul II’s apparent approval and repeated endorsement of the late, disgraced Fr Marcial Maciel Degollado, the Mexican founder of the Legionaries of Christ, who had children by two different women and who was accused of sexually abusing young legionaries

“The congregation concluded that there exists no sign of personal involvement of John Paul II in this case,” said Msgr Oder.

Asked by The Irish Times if John Paul II’s handling of the sex abuse crisis and of the Latin American liberation theology movement during his pontificate did not represent negative factors, papal spokesman Fr Federico Lombardi was keen to emphasise sainthood did not mean perfection

“Of course in a 27-year long pontificate, there are going to be controversial issues, controversial appointments; people will always say, ‘Oh he did not handle that well, I would have done it differently’ . . . The point is no one is saying a pope is infallible in everything he does in his pontificate, nor that his possible mistakes represent a terrible mortal sin . . .

“The point is that the church sees the saint as a great model, someone who bore witness to the Christian life in an outstanding way . . . but that does not mean that he was perfect in every single thing he did.”