‘Where are your promises?’ young protester shouted before police led him away 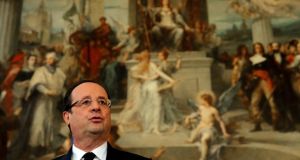 Before he died on February 13th, Djamal Chaar wrote to a local newspaper in Nantes to complain he had been refused unemployment benefits to which he believed he was entitled. He threatened to take his life. The police and firemen were waiting for him in front of the unemployment benefits office but Chaar outsmarted them: he doused himself in petrol out of sight, struck a match and appeared at the street corner in flames before crumpling to the ground.

On March 4th, a France Telecom employee in Pau who had just been laid off repeated Chaar’s desperate ending. The police and fire department has been called some 50 times in recent weeks in response to threats of self-immolation.

Chaar’s grisly death and the rash of copycat attempts finally prompted a meeting yesterday between the French minister of labour Michel Sapin and three associations representing nearly five million unemployed and disadvantaged French people. The minister issued a statement saying “the government is fully aware of the economic and social difficulties that France is going through and their consequences for the most fragile people”.


‘Dialogue of the deaf’
The jobless representatives called the meeting “a dialogue of the deaf”. In particular, the minister refused to reverse the demand that jobless individuals reimburse €300 million in benefits paid in error.

The words “distress” and “crisis” seem to punctuate every conversation in Paris. In the central 6th district the homeless camp out under the arcades of the Odéon theatre.

The temperature has been below zero every night this week. Each morning, there’s a man curled up in a sleeping bag in the glass phone booth next to the kiosk where I buy my newspapers. In the rue Clément, dozens of men and women queue outside the soupe populaire at lunchtime.

“Le changement, c’est maintenant,” the cashier in the boulangerie said bitterly, out of the blue. “That was François Hollande’s campaign slogan,” she reminded me. “Well, nothing has changed. In fact, it’s got worse.”

This week, for the first time since last year’s presidential election, Paris Match’s opinion poll showed 53 per cent of the population prefer the former president Nicolas Sarkozy to Hollande. Only 44 per cent preferred Hollande.

Hollande went to Dijon this week, in the hope of appearing close to the French people. The visit backfired when a group of trade unionists holding a portrait of socialist party founder Jean Jaurès “to remind (Hollande) that he’s a socialist” were shooed away before the president’s arrival.


Torpor
In Dijon, Hollande diagnosed three “blockages” crippling France: “the slowness to which everyone is becoming accustomed”; “the heaviness of procedures”; and “torpor in the face of the crisis”. Hollande’s problem is that “Monsieur Normal” is now associated with the very slowness, heaviness and lethargy he criticises.

“It’s time to show that there’s still a pilot in the plane . . . show he has backbone,” said an editorial in the Républicain Lorrain newspaper.

At the weekly cabinet meeting, Hollande’s government approved a constitutional reform that would abolish a special court for high-ranking officials; forbid cabinet ministers from holding local office; extend the powers of the high magistrates’ council; end the right of former presidents to sit on the constitutional council; and inscribe the principle of “social dialogue” in the constitution. The masses are not clamouring for these institutional tweaks, and the announcement gave the unfortunate impression that the government is fiddling while the unemployed burn.

Hollande abandoned three other constitutional reforms because they would have encountered too much opposition. The most intriguing was his promise to excise the word “race” from the constitution.

I asked a government spokeswoman for an explanation. “It appears in a positive way,” she said. “It says there shall be no discrimination on the basis of race.”

Then why did the president want to do away with the word? “Because we don’t believe there is any such thing as race,” was her Orwellian answer.

Throughout his political career Hollande has proven to be lucky. Though the long, cold winter will end soon, his acolytes predict 2013 will be the worst year of his term.

He gives the impression of hunkering down and waiting. The next election is four years away. Perhaps the US economy will recover and pull Europe along behind it. Perhaps Hollande will get lucky.