Postmortems show dolphins got entangled in fishery gear off Mayo 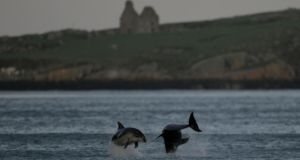 A pair of dolphins in Killiney Bay. Common dolphins are plentiful in Irish waters but because they feed on fish shoals very close to boats, they are at risk of being accidentally caught. Photograph: Cyril Byrne

Postmortems on several dolphins found dead along the Mayo coast in January indicate they had become entangled in fishery gear.

Minister for Arts, Heritage and the Gaeltacht Jimmy Deenihan expressed concern at the findings and said he had agreed a meeting between his officials and the Department of Agriculture, Food and the Marine to see how risks to dolphins could be minimised.

Thirteen common dolphins were found dead along the Mayo coast at Achill Island over one week in January. Most were washed up on Keel Strand, Dookinella and Keem Bay.

The Irish Whale and Dolphin Group had expressed concern at the unusually high number of dolphins washed up in the same area and said it was unprecedented. The Department of Arts, Heritage and the Gaeltacht said the situation was considered sufficiently unusual to warrant further investigation. It commissioned postmortem examinations on five of the animals and a special veterinarian team carried out the work at the Department of Agriculture’s regional veterinary laboratory in Athlone.

The examinations found evidence consistent with entanglement in fishing gear apparent in each animal and all postmortem findings suggested the dolphins were accidentally caught up by trawl-type fishery gear.

Common dolphins are plentiful in Irish waters but because they feed on fish shoals very close to boats, they are at risk of being accidentally caught.

Mr Deenihan pointed out that dolphins were subject to strict protection under national and international legislation. “I am concerned by any killing of these species, even where accidental,” he said.

“A meeting has been agreed between my officials and the Department of Agriculture, Food and the Marine to examine what further actions may be taken to minimise the risks to dolphins,” he said

Minister for the Marine Simon Coveney said he shared Mr Deenihan’s concern about the high number of dolphin deaths. He said many Irish and European fleets operated in an area that was intensely fished and it was not possible to say which of the fleets were involved in the incident.

“The results of these postmortems certainly remind us of the need to further our efforts to reduce incidental by-catch to the lowest possible level across all EU and third country fleets fishing in waters around Ireland,” he said.