Portugal investigates cause of forest fire as death toll rises 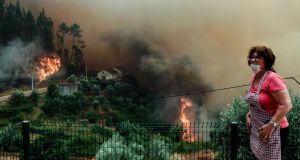 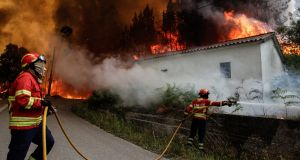 Firefighters battle with a fire. At least 61 people have been killed in forest fires in central Portugal. Photograph: EPA/Paulo Cunha

Portugal is investigating the cause of a devastating forest fire that claimed scores of lives over the weekend, as firefighters continue to battle wildfires across the country.

António Costa, the prime minister, described the blaze that broke out in a densely forested area near the small town of Pedrógão Grande, 200km northeast of Lisbon, as the country’s “greatest human tragedy in living memory”.

Jorge Gomes, secretary of state for home affairs, said at least 61 people had been killed in the fire and more than 50 injured, six of them seriously. The prime minister said the death toll could rise as rescuers continued to search buildings destroyed by the blaze.

Thirty of the victims had been killed in their cars as they tried to escape the flames, Mr Gomes said. The bodies of 17 others had been found lying on or near the same stretch of road, many of them apparently victims of smoke inhalation.

The government declared three days of national mourning as expressions of sympathy and offers of assistance poured in from leaders across the world, including Pope Francis, French president Emmanuel Macron and German chancellor Angela Merkel. 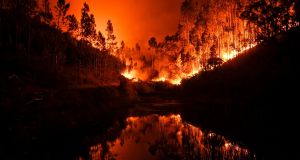 Film and photographs of the blaze showed burnt-out cars, forested hillsides engulfed by flames, burning farmhouses and firefighters struggling in a heatwave to control a blaze fanned by strong winds.

“We are trying to evacuate villages that are surrounded by flames and in great danger,” Valdemar Alves, the mayor of Pedrógão Grande, told the Lusa news agency hours after the blaze started at about 2pm on Saturday. “The fire came within 50m of the town.”

Residents fought the flames using buckets, hoses and branches. Helicopters ferried the injured to hospitals, and inhabitants of several threatened villages were evacuated to local schools and community centres.

The head of Portugal’s investigative police said the blaze appeared to have been caused by a dry thunderstorm and ruled out arson. “Everything indicates that the fire was started by natural causes,” José Maria Almeida Rodrigues told reporters. “We have even found the tree that was hit by lightning.”

Lightning from dry thunderstorms, in which rain evaporates before reaching the ground, is a common cause of wildfires and can also cause strong surface winds that fan flames. Whatever the causes are found to be, the disaster is expected to focus unremitting attention on the prevention of forest fires, a perennial problem that has faced successive Portuguese governments.

President Marcelo Rebelo de Sousa, who comforted survivors at the scene, said a rare combination of high temperatures, strong winds and zero humidity appeared to have contributed to the rapid spread and the extent of the fire, with different fronts extending for several kilometres. He praised firefighters as “true heroes”, saying “it was impossible to do more”.

Mr Costa said the immediate priority was to combat the fire, which continued to rage yesterday evening. The “disproportionate loss of life” was a “new reality” that required “nerves of steel” to deal with as well as care and support for families affected, Mr Costa said. – The Financial Times Limited 2017