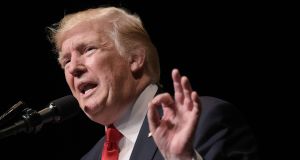 Donald Trump: the US president has regularly capsized official positions with his own candour on social media. Photograph: Mandel Ngan/AFP/Getty Images

A member of Donald Trump’s legal team has denied the US president’s own assertion that he is under investigation for obstruction of justice.

Jay Sekulow, chief counsel of the American Center for Law and Justice, appeared across the major political talk shows on Sunday.

Speaking on CBS’s Face the Nation, he said: “The fact of the matter is the president has not been and is not under investigation.”

His comments appeared to directly contradict Mr Trump’s own tweet this week, in which he appeared to refer to deputy attorney general Rod Rosenstein when he wrote: “I’m being investigated for firing the FBI director by the man who told me to fire the FBI director. Witch hunt!”

Mr Sekulow sought to brush aside the president’s words. Mr Trump, he said, was merely responding to an anonymously sourced Washington Post report that said special counsel Robert Mueller’s investigation into links between Trump aides and Russia had expanded to look at Mr Trump’s firing of FBI director James Comey. Mr Sekulow added: “The president issued that tweet on social media because of the report in the Washington Post from five anonymous sources none of which, of course, anyone knows about, alleging that the president was under investigation in this purported expanded probe.

“The fact of the matter is the president has not been and is not under investigation. So this was his response, via Twitter, via social media.”

On CNN’s State of the Union, Mr Sekulow sought to account for any confusion over Mr Trump’s apparently precise words by saying the president could not “in a tweet, include all that is there”. But, he added, “This is a president that has utilised social media, has revolutionised the whole concept of electioneering with social media.”

Mr Sekulow’s comments seemed to establish the position the president will take on the Mueller investigation, in any public testimony which the attorney said the president was still willing to give.

Mr Trump however has regularly capsized official positions with his own candour on social media, and a senior Republican close to the president voiced concern on Sunday that, once again, the president had caused needless problems for himself.

“Trump has a compulsion to counterattack,” the former House speaker and 2012 candidate for the presidential nomination Newt Gingrich said on ABC’s This Week. “I don’t think that tweet helped him.”

Mr Trump tweeted on Sunday morning. “The MAKE AMERICA GREAT AGAIN agenda is doing very well despite the distraction of the Witch Hunt,” he wrote, before citing an outlying Rasmussen poll that gave him a 50 per cent approval rating. Mr Trump also claimed falsely to have a higher approval rating than Barack Obama.