Speaking on BBC One’s Andrew Marr Show, British chancellor of the exchequer Philip Hammond says the cladding used on Grenfell Tower, which has been blamed for spreading the blaze, is banned in the UK. Video: BBC 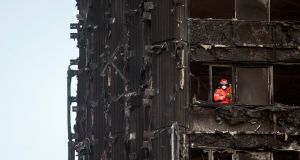 Grenfell Tower in North Kensington, London: The tragedy has laid bare divisions in a London borough where extraordinary wealth exists in proximity to public housing estates. Photograph: Will Oliver/EPA

Five days after a deadly blaze devastated a 24-storey West London tower block, local authorities have been sidelined after their relief effort was widely lambasted for failing to provide proper support to those affected by the fire.

A person involved in the emergency response told the Financial Times that Kensington and Chelsea Council would no longer be in charge of operations to help survivors of the Grenfell Tower fire. Gold Command, a hierarchy to organise the emergency response, will now be led by a group of chief executives from councils across London. It has also been renamed the Grenfell Fire Response Team.

“This new team is now leading the recovery and response to the Grenfell Tower fire,” Eleanor Kelly, chief executive of Southwark council, said in a statement released on Sunday evening on behalf of the new group.

As part of the shake-up, the British Red Cross will also be expanding its role in the relief effort “at the request of the authorities,” according to a Red Cross spokesperson.

At least 58 people who were in Grenfell Tower are missing and presumed dead, the Metropolitan Police said on Saturday.

Stuart Cundy, Metropolitan Police commander, warned families of those still unaccounted for that operations to recover and identify bodies were hampered by difficult conditions inside the burnt-out building.

British prime minister Theresa May, who has been criticised for a lacklustre response to the tragedy, admitted on Saturday that the support provided was “not good enough”.

Meanwhile, Labour leader Jeremy Corbyn stepped up calls for the government to take stronger action, including by requisitioning empty houses for the use of those made homeless by the fire.

“Occupy it, compulsory purchase it, requisition it – there’s a lot of things you can do,” he told ITV’s Robert Peston.

The tragedy has laid bare divisions in a London borough where extraordinary wealth exists in proximity to public housing estates, and brought scrutiny to a local council long dominated by the Conservatives.

Volunteers and community organisers involved in the Grenfell response have repeatedly voiced frustration at the lack of official support from the council and the central government.

Several residents and volunteers have complained that government officials have been virtually invisible in the area - in spite of claims to the contrary.

One of the volunteers, who lives locally and asked not to be named, called the response “abysmal” and said she was left struggling to manage a growing mountain of physical donations - enough, she thought, to last “30 years”.

“We’re the wealthiest borough in the country. We’re sitting on nearly £300 million [€342 million]. We couldn’t spend a little of it to get one or two emergency people in?” she said. “Of all the boroughs in this country, this one should be operating at the highest standards.”

Nicholas Paget-Brown, leader of Kensington and Chelsea council, refuted claims that council officials have been absent, saying they “have been working around the clock since Wednesday” to organise support.

Nevertheless, even some fellow councillors from Kensington and Chelsea expressed concern that the body had failed to co-ordinate relief efforts, or keep them informed.

Public anger boiled over on Friday afternoon, with hundreds of protesters occupying the council building. That led to the building’s closure on Saturday, and forced officials to work from other sites, according to a statement issued by the Royal Borough of Kensington and Chelsea council. It also confirmed that “officers from other boroughs have also been helping”.

The disaster has raised concerns about the safety of thousands of UK tower blocks, with senior opposition politicians calling for preventive measures to be taken. In an interview with Sky News, shadow chancellor John McDonnell called for sprinkler systems to be fitted to high-rise buildings to avoid similar incidents.

But chancellor of the exchequer Philip Hammond said the government would only consider retro-fitting sprinklers if a “proper technical evaluation” recommended it.

Mr Hammond said a criminal investigation and public inquiry will scrutinise whether building regulations were breached in a recent £8.6 million (€9.8 million) refurbishment of Grenfell Tower. Some have blamed insulating material that was fitted to the tower’s exterior in the refit for the fire’s rapid spread.