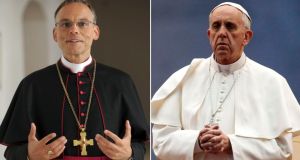 If anyone had doubts about both the priorities and the “management style” of Pope Francis, then yesterday’s decision to suspend the Bishop of Limburg, Franz-Peter Tebartz-van Elst, will go a long way to dispelling them.

For much of the last month, the bishop has been in the eye of a public storm following revelations that a renovation of his residence and offices would cost €31 million, and not the estimated €5.5 million.

Just two days after his election last March, Francis spoke of his desire for a church “of the poor and for the poor”, and so it was probable that he would take a hard line with a prelate who, reportedly, spent €15,000 on a bath.

The striking aspect of yesterday’s ruling is that it came just two days after Pope Francis had met the problem head on, having had a private audience with Bishop Tebartz- van Elst in the Vatican on Monday. If Francis had been looking for an controversial issue to drive home his own “church of the poor message”, then the Bishop of Limburg fitted the bill perfectly.

Yesterday’s Holy See statement does not define the length of the bishop’s suspension. However, Vatican observers suggest that if any of the allegations against him prove true, then he will not be restored as Bishop of Limburg.

In the meantime, no permanent decision can be taken until the German Bishops Conference has completed its own investigation into the affair.

Tebartz-van Elst is by no means the first priest to be “disciplined” by Pope Francis.

Within six weeks of his election Francis removed two Slovenian archbishops, Anton Stres of Ljubljana and Archbishop Marjan Turnsek of Maribor, because of their involvement in a €900 million financial scandal.

Clearly, the Bishop of Limburg is different both because of the prominence of his case and because he is a “German” problem inherited by Francis from his predecessor, Benedict XVI.

Lefebvre community
If Tebartz-van Elst is a problem inherited from Benedict, so too is the ultra-conservative St Pius X “Lefebvre” community.

In the last two weeks, Lefebvre priests have prompted consternation with gestures of support for Nazi war criminal Erich Priebke who died in Rome two weeks ago.

The problem with the Lefebvre community, out in the cold since the excommunication of four bishops in 1988, is that Pope Benedict spent time and energy trying to return them to “full communion” with Rome.

Given that a consistent anti-Semitic line of Holocaust denial now seems part of the Lefebvre identity, how will Francis deal with them?

After all, he is the pope who says that a true Christian cannot be anti-Semite, he is the archbishop who once co-wrote a book with a rabbi and he comes from Argentina, the country where Priebke “hid” for almost 50 years.

One suspects that mending fences with the Lefebvre traditionalists will not be a priority for this pope.