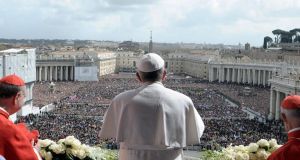 Pope Francis rounded off an intense week of Easter celebrations when bestowing his first Urbi et Orbi blessing yesterday at the end of a traditional Easter Sunday Mass on the steps of St Peter’s in Rome.

Speaking to an enormous crowd of perhaps 300,000 faithful and tourists, Francis used the occasion to make an appeal for “peace in the whole world”.

In his homily, the pope stressed the traditional Easter message of the “good news” of the “risen Christ”, who died to save all sinners. Towards the end of his address, however, he appealed for an end to bloodshed in a number of countries, including Iraq, Syria, Mali, Nigeria, the Democratic Republic of Congo, the Central African Republic and the Korean peninsula.

He also called for peace in the Middle East, “particularly between Israelis and Palestinians, who struggle to find the road of agreement”.

As he had done in several of his initial homilies, the pope drew attention to questions of social justice, railing against drug trafficking, human trafficking and exploitation of natural resources in a world that is “still divided by greed looking for easy gain”.

Francis both began and ended his homily yesterday by wishing everyone a “ Buona Pasqua ” (happy Easter).

Contrary to the accepted practice of his predecessors, he did not offer the traditional multilingual blessing in which the pope wishes the faithful a happy Easter in up to 65 different languages.


Less theatrical
Vatican insiders suggest that not only is the new pope less than comfortable with some languages, including in particular English, but also that he believes that the use of just one language – the papal lingua franca of Italian – renders papal ceremonies less theatrical and more straightforward.

As he has done throughout this opening phase of what is fast becoming a very different pontificate, Francis spoke only in Italian yesterday.

Not that this seemed to matter much to the packed square which exploded with enthusiasm when he did his “popemobile” tour, stopping, as has quickly become his wont, to kiss a number of babies and at least two severely handicapped young men.

Not since the funeral and the later beatification of John Paul II has St Peter’s seen crowds of the size which have filled the square for the set-piece ceremonies of this Holy Week, a week when Francis broke with tradition to celebrate the Maundy Thursday washing of the feet in a juvenile prison rather than in the Vatican.

In that ceremony, too, Francis washed the feet of two women and two Muslims.


Roads closed
When the pope celebrated the Way Of The Cross, at the Colosseum on Good Friday evening, there was such a large turnout that police were forced to close off much of downtown Rome.

Yesterday’s crowd inevitably included many of the pope’s Argentine compatriots, some of whom even managed to hand him the soccer shirt of his favourite club, San Lorenzo of Buenos Aires.