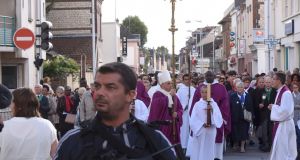 Archbishop of Rouen and Primate of Normandy Mgr Dominique Lebrun carries a crucifix as he leads a procession, under security measures, to the memory of slain French priest, Fr Jacques Hamel. Photograph: Steve Bonet/Reuters

Pope Francis has put a French priest knifed to death at his altar by Islamist militants in July on the fast track to possible sainthood, the Archbishop of Rouen Dominique Lebrun said on Sunday.

At a special mass designed to purify the church where 85-year-old Fr Jacques Hamel was killed, Archbishop Lebrun said Pope Francis had set aside the period normally imposed after someone’s death before the process of beatification can start.

“Pope Francis has waived the five-year delay before a sainthood process can begin,” Lebrun told hundreds of people at the church of Saint-Étienne-du-Rouvray, near Rouen, in north west France.

Usually a miracle needs to have been declared for a candidate for sainthood to be beatified. But that requirement can be waived if there is evidence that the person died a martyr.

Last month, during a mass in memory of the dead priest, Francis used the words martyr or martyrdom 10 times in his homily at the Vatican.

In early July, two attackers stormed into the church in Saint-Étienne-du-Rouvray, forced the elderly priest to his knees and slit his throat while they chanted in Arabic.