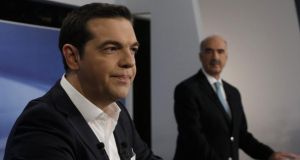 The reams of campaign literature stored in the stairwell of Syriza’s newly opened party offices in Corinth serve as a reminder of the Greek left-wing party’s recent swings.

“Let’s put an end to memorandums and fascism!” says one 2013 poster above an image showing omnibus bailout laws and a swastika unceremoniously binned in a dumpster. “Getting rid of the old, winning tomorrow,” say the posters from the party’s current election campaign, in which it has the unenviable task of trying to sell a deal it vowed never to sign.

With two of three most recent polls suggesting it was marginally ahead of its main contender, New Democracy, Syriza may indeed be given a second chance at government on Sunday, in the country’s second general election this year.

For Giorgos Pychogios (32), a young MP with the party seeking re-election, it has been a difficult few months, personally and politically. But he’s confident the party will emerge as first party, locally and nationally, despite the difficult decisions – or, some would say, U-turns – it has taken.

“It was very hard for us to vote Yes,” he says of the third bailout package. “For those on the left, it was a more difficult thing to do than vote No. And the public understands that. The deal was humiliating, but we had to put the country above the interests of our party and ideology,” he says.

Locally, many in Syriza felt the party should have built on the results of a referendum called to reject an earlier bailout proposal from the country’s creditors. Last month, half of Syriza’s regional executive in the Corinthia region resigned in protest at the path the party was taking. They said the party was no longer functioning democratically and had reneged on its stated political aim of abolishing the memorandums.

Among those who departed was the regional party secretary, Thodoris Vasilakopoulos, who says the movement he and others helped build up over the past five years was effectively “annulled” by its leader, Alexis Tsipras, and his advisers.

He describes a shift that took a party whose slogan used to “You are Syriza” to one where the leadership ignores party structures. For him, the last straw was Tsipras’s decision to call a general election before holding a party congress, as the former prime minister had promised.

“We announced we were leaving a few days after [Syriza splinter party] Popular Unity was founded, and I find it strange that there was no attempt to keep us in the party. I think they wanted to clear out Syriza, not just of Popular Unity people but even members like me who were somewhere between the two camps.”

While Popular Unity has won over erstwhile committed Syriza activists, including 25 of the party’s 149 MPs from the outgoing parliament, the 3-4 per cent the new party is scoring in opinion polls suggests its impact on voters has been much less significant.

“We’re at a crossroads between the euro and the drachma,” says Kostas Stamatis, “but it’s clear the people are still afraid of going back to the old currency. But we’re sure that will change as the effects of the new memorandum become clear.”

“We shouldn’t scare the people with any drachma talk,” says his running mate, Giorgos Pavlou. “For now, we just need to say we’re in favour of supporting the average person, not the banks.”