Politicians from Greece’s Golden Dawn party due in court

Politicians among 22 people arrested in crackdown on Nazi-inspired party 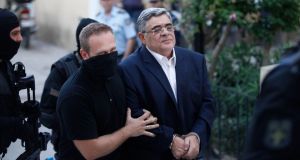 Four politicians from the extremist right-wing Golden Dawn party are due in court for a preliminary hearing into charges of participating in a criminal organisation.

Ilias Kassidiaris, who is also the party’s spokesman, Ilias Panagiotaros, Yiannis Lagos and Nikos Mihos are to appear this afternoon for a deposition.

Another three party members are scheduled to appear earlier in the day. The party’s top figures, including its leader, are among 22 people arrested in a crackdown on the Nazi-inspired party sparked by the fatal stabbing on September 17th of a Greek rap singer.

Arrest warrants have been issued for another 10 people. Golden Dawn rose from a fringe group to become Greece’s third most popular party in recent years, riding on a wave of anger over the country’s deep financial crisis.

It won nearly 7 per cent of the vote and gained 18 seats in the country’s 300-member parliament in elections last year. Party members and even politicians have frequently been accused in the past of being behind numerous violent attacks, mostly against dark-skinned migrants.

Party leader Nikos Michaloliakos is to appear in court for his deposition tomorrow, while a sixth politician heads there on Thursday.