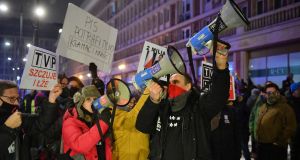 People on a picket in front of the Polish television building in Warsaw, Poland. Protesters object to the plan to impose tax burdens on private broadcasters. Photograph: Radek Pietruszka/EPA

Poland’s nationalist government has decided to rethink a proposed advertising tax after independent news outlets protested and the European Union and United States expressed concern over its potential impact on media freedom.

“We are reviewing all the suggestions made by various media groups and other interested parties, and based on that a draft will be submitted that includes some of these remarks,” Polish government spokesman Piotr Mueller said on Tuesday.

Plans for the tax, which the government claims is intended to make international media giants pay more into Polish coffers, have caused disagreement in the ruling alliance, with a spokeswoman for junior coalition partner Accord saying the proposals were “unacceptable” to her and most parliamentary deputies.

Accord leader and deputy premier Jaroslaw Gowin said he would start talks on the advertising levy with Polish publishing firms on Wednesday: “No potential tax should be introduced without consulting entrepreneurs,” he added.

Polish officials insist the plan poses no threat to press freedom, but independent news outlets say it would pile more pressure on their finances at a time of hardship due to the coronavirus pandemic, while pro-government and public media enjoy a steady flow of advertising and other funding from the state.

The proposals also heightened international concern over the growing pressure felt by independent media in Poland and Hungary, which are run by populist governments that the EU accuses of undermining democracy and the rule of law.

European Commission spokesman Christian Wigand said last week the EU expected Poland and other members “to ensure that their fiscal or other policies will not affect the duty of ensuring a free, independent and diverse media ecosystem”.

US state department spokesman Ned Price spoke of “a constricting space for civil society within Poland” and said Washington was “committed to supporting a diversity of independent media voices and opinions, which we believe are essential to vibrant democracies”.

Mr Wigand confirmed on Monday that the European Commission had asked Hungary to allow a leading independent radio station, Klubradio, to remain on air pending a final court ruling on a decision to remove its broadcasting licence.

He said Klubradio had lost its radio frequency on “highly questionable legal grounds” and could suffer “irreparable damage” by being forced to operate only online.

Klubradio has remained a strong critic of Hungary’s authorities even as the government and loyal businessmen have tightened their hold on the nation’s media; officials insist the ruling against the station was not political, but stemmed from its repeated violation of broadcasting rules.