Podemos may have peaked too soon as election nears 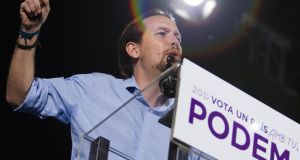 As Pablo Iglesias sought to discredit one of his rivals in Monday’s election campaign debate, the Podemos leader’s grasp of English failed him. Attacking the “revolving doors” culture which has Spanish politicians often walk into prestigious multinationals shortly after leaving government posts, Iglesias identified a former socialist who had taken up a job with PricewaterhouseCoopers. Instead of pronouncing the company’s name correctly, he said: “House-Water-Watch-Cooper.” Within seconds, Iglesias was being ridiculed on social networks.

But that wasn’t the end of the debate for the Podemos leader, who was facing his counterparts in the Socialist Party and Ciudadanos, as well as deputy prime minister Soraya Sáenz de Santamaría of the Popular Party (PP). In the dying seconds of the encounter, he delivered a powerful one-minute summary which for many observers won him the contest.

Iglesias’s journey in that debate from the ridiculous to the sublime was entirely in keeping with a man who, in less than two years, has experienced more triumph and disappointment than most politicians do in a lifetime. On December 20th, Podemos goes into the Spanish general election as a major political force, but one which many believe has peaked too soon.

At the beginning of 2015, Podemos looked unstoppable. Several polls showed the party in first place in voter intention, the first time that the PP and socialists’ grip on power had been loosened in 3½ decades. It was also buoyed by the fact that fellow anti-austerity party Syriza, a close ally, had just won the Greek elections. “We’re going to beat the PP in the general elections,” Iglesias (37) said and there were plenty of reasons to believe him.

Eleven months on, though, Podemos is in fourth place in mainstream polls. Polling firm Metroscopia shows it to be five points behind three tied frontrunners: the PP, the socialists and another new arrival, Ciudadanos. Next week’s vote comes three months after a disappointing showing for the party in a Catalan election.

The rise of Ciudadanos has been perhaps the biggest single problem for Iglesias’s party, but the Syriza government’s woes in Greece have also hurt it, frightening voters from the idea of backing a fiercely anti-austerity party.

In addition, many of those who joined Podemos soon after its founding in January 2014 have subsequently felt aggrieved by its transformation from a civic organisation, inspired by the indignados protest movement, into a conventional political party. “I never imagined that the change would happen so fast,” says Marina Morales (27), who joined one of Podemos’s hundreds of “circles”, or local chapters, in southern Madrid.

She felt power was becoming increasingly concentrated in the party’s hierarchy, rather than its circles. “I went from being excited at the prospect of a real change for the country to disappointment,” she says. “I felt let down.”

One of the criticisms most frequently aimed at Podemos is its reliance on the media-friendly image of Iglesias. The ponytailed former university professor with a penchant for check shirts and jeans has almost single-handedly stripped Spanish politics of a layer of stuffiness and aloofness.

However, for an organisation that was born from a desire for a more horizontal style of politics, it uses the goateed face of Iglesias an awful lot. “There’s been too much emphasis on him, because his image is easy to sell,” says Agustina Carpintero, a Podemos activist in the town of Navalcarnero, near Madrid.

“He’s brought together people who had nothing in common apart from their discontent at what is happening in this country. So I acknowledge what he’s done in that sense, but we need to make sure we don’t overemphasise the importance of the leader.”

During its two short years of life, Podemos has also seen some startling alterations to its policy manifesto. Having initially presented an unapologetically leftist raft of measures, including lowering the retirement age to 60, nationalising private companies, creating a state handout and drawing up a new constitution, the party today offers a much more moderate programme, albeit while maintaining its hostility to austerity.

Its leaders, meanwhile, insist that the core message has not changed: that the majority of Spaniards, still reeling from more than half a decade of economic crisis and scandal, want a genuine shift towards transparency, social justice and equality.

“We arrived at just the right moment, with the right formula,” Miguel Urbán, one of the party’s co-founders, told The Irish Times. “We haven’t just been creating a set of policies for a political party, but rather ones with which to change an entire country.”