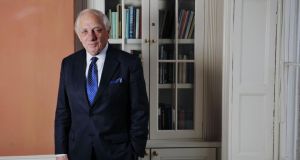 “I think it would be a gross exaggeration to say that the outcome of the summit is anything like satisfactory in terms of saving lives,” said Peter Sutherland, speaking to RTÉ’s Morning Ireland. Photograph: Aidan Crawley/The Irish Times.

The Irish special representative for international migration in the UN Peter Sutherland says EU countries are more concerned with stopping smugglers in the Mediterranean than saving the lives of refugees.

At a summit held yesterday, specially convened following the deaths of up to 900 migrants when a boat sank off the Italian coast on Sunday, EU ministers and heads of state agreed to a substantial increase in funding for search and rescue missions in the region.

The agreement reached will see the number of maritime patrols brought back to levels last seen prior to the winding down of Italy’s €110 million Mare Nostrum programme, which was replaced by the smaller-scale Triton operation co-ordinated by the EU Frontex border agency.

“I think it would be a gross exaggeration to say that the outcome of the summit is anything like satisfactory in terms of saving lives,” said the former attorney general, speaking to RTÉ’s Morning Ireland.

“It has to be emphasised that the underlying tone of the statement issued after the summit was one of spending money to stop smugglers bringing people across the Mediterranean rather than to save lives.

“No doubt some saving of lives will accrue from the increase in resources that are made available, but a lot of the communiqué relates to attacking smugglers and attacking boats that may bring those who are escaping war and pestilence across the Mediterranean rather than saving lives,” he added.

Mr Sutherland also called for countries such as Ireland and the UK to do more to accommodate desperate migrants who make their way over to Europe.

A recent report by Oxfam criticised Ireland for not taking its fair share of asylum seekers from the Syrian crisis, a situation which he says also extends to the plight of Libyan and north African refugees.

“The current situation is that the allocation of refugees in states around Europe has been grossly disproportionate to some as opposed to others. The Germans and the Swedes, for example, have taken literally tens of thousands of refugees. The UK has taken a paltry number- 143 I think.

“Ireland also has a very small allocation- to date I think 114 from Syria, and a potential for 220 more. The reality is there has not been a fair allocation across the EU, and some countries are carrying everybody else,” he said.

Speaking on the same programme, Minister for Defence Simon Coveney said Ireland will send a naval vessel to the Mediterranean to assist with humanitarian operations within the next two weeks.

Echoing sentiments expressed by UK prime minister David Cameron, he indicated that any migrants rescued would not be brought back to Ireland, and would instead be left at “coordination and drop-off areas” in the Mediterranean.

“I don’t think it’s practical, that if an Irish naval vessel rescues people on the Mediterranean, that it would steam all the way back to Ireland with them... This is not a simple straightforward problem. We have thousands of refugees now attempting to cross the Mediterranean in very, very dangerous circumstances. They come from very complex backgrounds so it’s not as simple as simply returning them home- that’s not possible in many cases,” he said.

Representatives from various Government departments, as well as the Defence Forces and the Attorney General will be meeting next Tuesday to discuss Ireland’s naval contribution to the beefed-up programme.