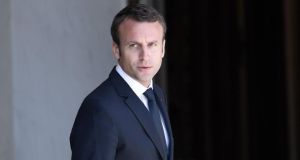 US president Donald Trump’s abrasive manner and erratic behaviour are posing fresh challenges to multilateral institutions, as will be clear at a meeting of North Atlantic Treaty Organisation heads of states and government in Brussels on Thursday and the G7 summit in Taormina, Sicily, on Friday and Saturday.

When France’s new president, Emmanuel Macron, sits down to lunch with Trump on the sidelines of the Nato summit on Thursday, he will bear in mind the rule formulated by the New York Times: “Keep it short – no 30-minute monologue for a 30-second attention span.”

Macron “will be concise and direct” during the hour-and-a-quarter meal, an adviser said.

Nato leaders will inaugurate the alliance’s new €1.1 billion headquarters, which contains two memorials. A steel beam from the World Trade Center is a reminder that article five of the 1949 treaty, committing all 28 members to each others’ defence, was invoked for the first time on 9/11.

Two chunks of the Berlin Wall symbolise the victory of the Nato over communism and the former Soviet Union.

Trump is the only US president not to have explicitly endorsed article five, according to the Brookings Institution in Washington. Nor has he appointed an ambassador to Nato. During his campaign, he pronounced the alliance “obsolete”, then flip-flopped last month, saying: “I said it was obsolete; it’s no longer obsolete.”

In view of questions raised by Trump, Macron’s main priority is “to reaffirm the cohesion, unity and solidity of the alliance”, an adviser said.

The French leader will resist US and British attempts to have Nato designated a full partner in the 68-nation coalition fighting Islamic State in Iraq and Syria.

France will also continue to campaign for closer defence co-operation between Nato and the EU. “The link with European defence is very important to us,” said a source at the Élysée.

Trump sees the Nato partners as deadbeat freeloaders who refuse to pay for their own defence. He has particularly angered German chancellor Angela Merkel by hectoring Germany to play a more prominent role.

Nato agreed in 2014 that member states would increase defence spending to 2 per cent of GDP. Germany spends only 1.2 per cent at present but argues that it devotes a substantial amount to development aid. And Germany is Nato’s second-largest contributor, providing 14.65 per cent of the budget, compared with 22.14 per cent for the US.

France ranks third, paying 10.63 per cent of Nato’s budget, and portrays itself as a star pupil. Macron has promised to raise defence spending from 1.8 per cent of GDP to 2 per cent.

When Trump claims Nato doesn’t do enough to fight terrorism, Macron may remind him that Paris spent €890 million last year fighting jihadists in Iraq, Syria and the Sahel region of Africa.

The leaders of Canada, France, Germany, the US and UK will follow their Italian colleague Paolo Gentiloni back to Italy, where the Japanese prime minister Shinzo Abe will join them for the G7 summit of the world’s largest economies. It will be the first such summit for four of the seven.

In Taormina, Trump will be at odds with his counterparts on two issues: free trade and climate change. He is reviewing both, but has come up with clear policies on neither.

At a meeting of G7 finance ministers and central bank governors in Bari earlier this month, US treasury secretary Steven Mnuchin said: “We don’t want to be protectionist, but we reserve our rights to be protectionist if we don’t believe trade is free and fair”.

US negotiators were unable to state defined positions in pre-summit talks. Europeans and Americans could find common ground on the need for reciprocity in open markets, a French official said, but Trump’s refusal to allow the World Trade Organisation to arbitrate was “incoherent because if you want to regulate trade, the WTO is the base”.

Macron wants Trump to continue Barack Obama’s commitment to the Paris accord on fighting climate change. The Americans had promised the French that Trump would decide before the summit, then postponed the decision.

Trump has put the Italian presidency of the G7 in the difficult position of having to choose between a final communique so watered down as to be meaningless, or no communique at all.

Russian president Vladimir Putin will not be in Taormina. As the Élysée put it: “Russia removed itself [from what was the G8] with its annexation of Crimea in 2014.”

But Macron will receive Putin at the Palace of Versailles on Monday, to celebrate 300 years of Franco-Russian diplomatic relations. These have been sorely tested by Russian intervention in Ukraine and Syria, western sanctions against Russia, and Putin’s support for Macron’s rivals, François Fillon and Marine Le Pen, during the presidential campaign.