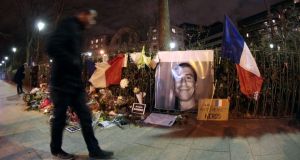 A man walks past a makeshift memorial for French policeman Ahmed Merabet near the site where he was shot dead. Photograph: Joel Saget/Getty Images

On Boulevard Richard Lenoir, as a sea of people made their way towards Place de la République to join the march, many of them paused at a shrine of candles and flowers on the path. The improvised memorial marks the spot where policeman Ahmed Merabet ( 40) was shot in the head at point-blank range by one of the Charlie Hebdo attackers.

Merabet, who was Muslim, lived in a suburb north of Paris and was stationed in the 11th arrondissement, where Charlie Hebdo had relocated last year after an attack on its old premises. Colleagues recalled a professional officer who was universally liked and respected in the force. In the days since his death, the photo of a smiling Merabet has become ubiquitous, as has the slogan “Je Suis Ahmed”, which adorned posters and placards across France this weekend. His funeral took place on Sunday morning.

An image of the moment before he was killed captures the horror of the atrocity; this week it appeared in newspapers around the world.

In recent weeks, Merabet had been planning to move in with his partner. He recently got a promotion; last Wednesday, he had been on one of his last patrols.

At an press conference on Saturday, Ahmed’s brother Malik said his death was a “waste” and asked that Islam not be conflated with extremism.

Ahmed was proud to be a policeman, “defending the values of the French republic”, his brother said. “He was committed. He looked after his mother and his close family. He was a pillar of the family. He was a very protective father, a lovely brother, a loving companion.”

Malik said the family, who are of Algerian origin, was “devastated by this barbaric act” and grieved for all the victims.

Pushing back tears, Malik said: “I am addressing myself to all racists – the Islamophobes and the anti-Semites. You must not mix up extremism with Muslims. The madmen have no colour nor religion. Stop . . . having wars or burning mosques or burning synagogues because you are attacking people.

“My brother was Muslim and he was killed by two terrorists, by two false Muslims. Islam is a religion of peace and love.”

Of the men who killed his brother – and who were themselves killed by police in a shoot-out at a printing plant northeast of Paris on Friday evening – Malik said: “I am glad they were stopped.”

A third police officer was killed on Thursday morning. Clarissa Jean-Philippe (25) was shot dead by Amedi Coulibaly as she redirected traffic after a car crash in Montrouge in southern Paris. The young woman was still training, as she had only recently passed the exam to become a member of the Police Municipale.

She had come to college in Paris from her home in the countryside in Martinique, an overseas region of France in the Caribbean, where she left behind her mother and brother. David Merseray, vice-president of the CFTC police union, said Jean-Philippe’s mother learned of her death on the radio.

On the march in Paris on Sunday, many people carried placards that declared “Je Suis Policier”. Applause broke out in the crowd when members of the security forces passed by. “Merci,” the demonstrators called out.