Paris attacks: Woman in flat was not wearing suicide belt 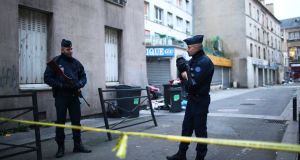 Police near the scene of a raid on an apartment building that was aimed at finding Abdelhamid Abaaoud, the Belgian militant suspected of organising terror attacks that killed 130 people last Friday, in the northern Paris suburb of St-Denis. Photograph: Pierre Terdjman/New York Times

Investigators sorting through body parts from a flat in Paris raided by French police on Wednesday now believe Hasna Aitboulahcen, a woman who died there, was not the one wearing a suicide belt, a source close to the investigation said.

Headlines flashed around the world this week that Aitboulahcen had become Europe’s first woman suicide bomber, after officials said they believed she had blown herself up at the scene of the raid in a northern Paris suburb.

Two other people died at the flat in St Denis on the city’s outskirts after Aitboulahcen, believed to be the cousin of suspected Paris attacks mastermind Abdelhamid Abaaoud, took him there on Tuesday evening.

One of the dead has been confirmed as Islamist militant Abaaoud. The other has yet to be identified.

Police had been hunting Abaaoud since the killing of 130 people in Paris on November 13th, which was claimed by Islamic State, and which they believe he orchestrated.

“The initial findings from the special police indicated that it (the suicide belt wearer) was her,” said the source. “But the skull we found on the pavement was not hers.”

The fighting at the flat was so intense that it took more than a day for investigators to establish that there had been three people present in the flat, and not two.

Meanwhile, prosecutors in the French capital said on Friday that two of the bombers who blew themselves up at the Stade de France in Paris last Friday during attacks that killed 130 people had travelled to Greece together.

One of the suicide bombers at the stadium in the northern suburb of St Denis had been identified from a Syrian passport found near his body as Ahmad al-Mohammad, though it was not clear whether the passport was genuine or had been stolen.

Reuters reported on Tuesday that the passport holder, who arrived in Greece alongside 198 refugees by boat from Turkey on October 3rd, may have been travelling with an accomplice.

In a statement on Friday, the Paris prosecutor said the suicide bomber who detonated his explosive vest at Gate H of the stadium had his fingerprints taken in Greece on October 3rd, at the same time as the bomber who blew himself up at Gate D.

A counter-intelligence source in Macedonia told Reuters that Mohammad was still travelling with a companion two days after reaching the Greek port of Piraeus.

They registered together at a refugee camp in the backyard of an old tobacco plant in the Serbian town of Presevo, though Serbian officials have not mentioned an accomplice.