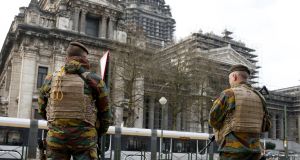 Belgian soldiers stand guard in front of the Brussels’ Palace of Justice. A Belgian court has released from custody one of 10 people charged with involvement in the Paris attacks. Photograph: Francois Lenoir/Reuters

A Belgian court released from custody on Friday one of 10 people charged with involvement in the Paris attacks because of insufficient evidence against him, the man’s lawyer said.

Ayoub Bazarouj (22) was detained after a search of his house on December 30th, being charged the next day with terrorist murder and participation in a terrorist organisation.

Federal prosecutors confirmed the court had authorised his release, but said that they had not dropped the charges.

However, Bazarouj’s lawyer Yannick De Vlaemynck said that the court had decided that there was not sufficient evidence for either charge and had released him without conditions.

Many of those being held in Belgium are charged with having aided suspected terrorist Salah Abdeslam, a former Brussels resident who was in Paris on the night of the November 13th attacks, in which 130 people were killed.

“He knew of Salah Abdeslam as he lived in the area, but he was not a friend and there are no elements showing that he provided help in any way,” Mr De Vlaemynck said.

Separately, one of two men detained this week on suspicion of ties to the November 13th Paris attackers, Mustafa E, has also been released.

The other man, Zakaria J, is set to appear before a judge later on Friday.

Belgium has been at the heart of investigations into the attacks in Paris as four of the Paris suicide bombers had either been living in Belgium or were Belgian-Moroccans.

Belgian investigators are still looking for two fugitives, including Abdeslam, following the attacks.