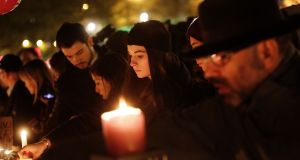 In driving rain and storm force winds, several hundred people joined French honorary consul Catherine Gagneux at Galway’s Spanish Arch for a minute’s silence and a rendition of the Marseillaise in memory of the victims of Friday night’s attacks in Paris.

Mayor of Galway Frank Fahy (FG), Minister of State for Justice Aodhán Ó Riordáin, and deputy city mayor Niall McNelis expressed their sympathies to Ms Gagneux and to many members of Galway’s French community as a French tricolour was unfurled under the 16th century arch.

Ms Gagneux was particularly moved when six representatives of the city’s Ahmadi Muslim mosque presented her with a bouquet of flowers in the French national colours, including red roses.

“Those people who perpetrated this last night in Paris have nothing to do with Islam - they are nationalists who are after power and money,” Tahir Mahmood, one of the Ahmadi representatives, said.

“Personally, I am still shaken - I won’t up this morning saying to myself that the numbers of those who died cannot be right,” Ms Gagneux said.

“In adversity, we need to keep together and be strong together - not just in France, but in Europe and internationally,”she said. “We must stay strong and stay together, and keep on meeting,”she said.

“Our sympathies go out to all those who were injured and who have lost loved ones,” he said, and said that a book of condolences would open in Galway City Hall on Monday morning.

Among those attending were NUI Galway lecturer Sylvie Lannegrand from Bordeaux, who had only returned from Paris several days ago, along with Galway arts practitioner Claude Madec and Klervi Illy, both from Brittany.

Aurelien Casanova, who lives in Galway and is from Paris’s east side, expressed appreciation for support he and his compatriots had received from Galway residents.

“I checked in with my younger sister, who is in Paris, and of course we are only just realising the scale of what has happened,” Mr Casanova said. “I would be afraid that some people will take political advantage of this situation now - everybody’s voice has to be heard and we must allow for dialogue.”

Marie Keating from Barna, whose daughter Katie Campbell is visiting Paris this weekend, was among the Galway residents, some holding candles. “Katie and her friend Hannah were staying in the 9th arrondissement, and are safe and well, but she has gone to donate blood as a gesture of support for the many injured,” Ms Keating said.