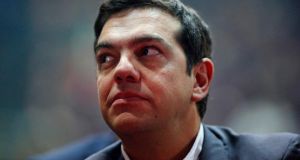 A modest follower of the Greek left through its various ups and downs over four decades, Sotiris Moschonas said he had never seen anything like it.

He glanced back at the rows of seats behind him in Corinth’s municipal theatre that were already full well before the scheduled arrival of Alexis Tsipras, the leader of Greece’s anti-austerity leftist Syriza party.

Even though he kept his audience waiting for almost an hour, no one in the packed hall seemed to care, as they listened to and, at times, sung along to the pre-rally playlist made up mainly of musical staples of the Greek left.

The audience was patient. As Moschonas pointed out, Syriza’s election slogan “Hope is coming”, written in large white letters on a red backdrop on the stage, wasn’t “there for nothing”.

“This is the first time that a left-wing party leader has ever come to Corinth to speak at a pre-election rally and when I look around, I see people whom I would never have expected to see at a Syriza event,” said Moschonas, a state railway employee in his mid-50s who hopes to retire next month.

“This shows, I believe, that Syriza is heading for an overall majority, a dramatic result that could change everything, in Greece and in Europe.”

When Tsipras eventually entered the hall, he was met by a standing ovation and chants of “the time of the left has come”.

The giveaway measures, which the party says it has costed, include providing free electricity to households that cannot pay their bills, food allowances to 300,000 people, free healthcare, a Christmas bonus to low-income pensioners, free transport for the poor and reducing heating oil costs.

In contrast to this detail though, Tsipras did not outline how he intended to deal with country’s creditors and EU partners if he came to power.

Since 2012, the party has quietly dropped its demands to bin the memorandum and Tsipras did not even mention the German chancellor by name.

Rather, the Syriza leader, who never wears a tie and sports an additional fifth red button on his jacket cuff, sought to assure his audience that his party’s proposals for a huge writedown of Greece’s national debt was supported by “leading economists and intellectuals” across Europe.

Moreover, he said, European institutions and much of the European media had dismissed the possibility a Greek exit from the euro.

“Recent developments have shown that a Grexit is finished and the only thing left is a Samaras-exit,” he told his cheering audience, referring to the incumbent conservative prime minister.

Winning over hearts and minds in constituencies like Corinth will be crucial if Syriza is to win the overall majority it now covets but which most recent polls, bar one its party newspaper commissioned, suggest is unlikely.

Located at the neck of the Peloponnese, Corinth has swung between conservative New Democracy and socialist Pasok majorities since the restoration of democracy in Greece 40 years ago.

Even though it came second on 24.67 per cent, Syriza narrowly missed out on taking a seat – it needed a straight 25 per cent – due to Greece’s electoral law that rewards the largest and smallest parties.

As the audience clapped and cheered Tsipras on, Moschonas said he was under no illusion that the party could deliver on all its promises.

“The people would be satisfied if Syriza achieves three out of every 10 promises they make. What they cannot stand is the blackmail coming from Europe warning against voting for Tsipras.”