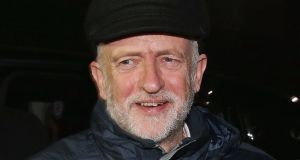 Jeremy Corbyn: one of the shocks of 2015 in the UK political system was the election of left-wing backbencher Corbyn as Labour leader. Photograph: Dan Kitwood/Getty Images

It was 10pm on May 7th when the first exit poll of Britain’s general election turned the collective wisdom of Westminster on its head, predicting an overall majority for David Cameron’s Conservatives. At first, some politicians and pundits refused to believe it, with former Liberal Democrat leader Paddy Ashdown promising to “publicly eat my hat” on television if the poll’s predicted rout of his party came to pass.

Ashdown subsequently ate a marzipan hat but May’s election result was just one of a number of shocks to Britain’s political system in 2015, which also saw the election of left-wing backbencher Jeremy Corbyn as Labour leader, and the Scottish National Party’s (SNP) capture of all but three of Scotland’s 59 Westminster seats. All these upsets left the coterie of politicians and commentators who dominate Westminster looking out of touch with public opinion, which showed itself to be either more conservative or more radical than expected.

The closing polls of the general election agreed that Britain was heading for a hung parliament, with Labour’s Ed Miliband most likely to become prime minister. David Cameron faced criticism throughout the campaign for the lassitude with which he conducted it, and even within his party, few expected the Conservatives to increase their number of seats, much less win an overall majority.

If Labour’s performance in England was disappointing, in Scotland it was disastrous. For decades the dominant political force north of the border, Labour lost all but one of its Scottish seats in May, and looks set for further losses in the Scottish parliamentary elections in 2016.

The simple explanation for Labour’s rout in Scotland is that it alienated voters by joining forces with the Conservatives to oppose independence in the 2014 referendum. The referendum undoubtedly awakened a new political consciousness in Scotland, and the SNP has consolidated its position under the popular leadership of first minister Nicola Sturgeon. But Scotland’s disillusionment with Labour grew its roots long before the referendum campaign, as the party in Scotland became more complacent and out of touch. As soon as Scots saw that they had an alternative route to keeping the Tories in check, they took it.

If the Conservative election victory and the SNP’s landslide took the pundits by surprise, the election of Jeremy Corbyn as leader of the Labour party has almost paralysed the political establishment with shock. Facing three uninspiring rivals, Corbyn won majority backing from all sections of those eligible to vote in the leadership election. All except one – his party’s MPs.

As few as 14 of Labour’s 232 MPs may have voted for Corbyn, one of the most left-wing members of the Parliamentary Labour Party, who defied the party whip more than 500 times in his three decades in parliament. Corbyn’s apparent authenticity was a dramatic contrast to the ideological flexibility and managerialism of the Labour party under Tony Blair and Gordon Brown.

His election was, for many of his supporters, not only a rejection of the Blair-Brown years but of the conventional wisdom in the media as well as Westminster which held that the most Labour could do was to manage the current economic order rather than transforming it.

During Corbyn’s first weeks as leader, Labour MPs still hoped he might fade away within months, toppled in a coup or worn down by the relentless hostility of the media, including sections of the press traditionally friendly to the party. December’s byelection victory in Oldham, and the sheer resilience of Corbyn and his immediate circle, have now persuaded many of his enemies in the Parliamentary Labour Party that their leader will not go without a fight.

The political year ended on a positive note for Cameron as he returned from a European Union summit in Brussels confident of a successful renegotiation deal when EU leaders next meet in February. That would allow the prime minister to call a referendum on Britain’s EU membership as early as June. Opinion polls show the two sides neck-and-neck but much will depend on the nature of the campaign and on the performance of Cameron himself. The conventional wisdom predicts that Britain will vote to stay in Europe, but after the political upsets of 2015, nobody is taking public opinion for granted.