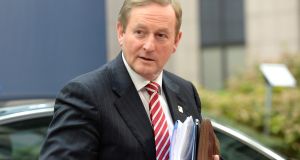 Enda Kenny: “No other state-aid cases have been opened against Ireland arising from the information submitted to the commission, nor have we any indication that there are any other cases under consideration.” Photograph: Thierry Charlier/AFP/Getty

Taoiseach Enda Kenny has said that he does not believe that there are any impending state-aid cases against Ireland from the European Commission.

In an interview with The Irish Times, EU competition commissioner Margrethe Vestager declined to rule out further investigations into Ireland’s tax arrangements with companies. She said that her department was currently assessing about 1,000 tax rulings from across the EU countries that offer such rulings.

It is understood that Ireland had provided details of up to 300 tax rulings it offered to companies over a three-year period when the European Commission requested information about its tax arrangements with Apple in 2013.

Mr Kenny confirmed on Friday that Ireland had provided details of all tax rulings between 2010 and 2012 to the commission. However, Mr Kenny said that the commission had opened a state-aid investigation in respect of one case only.

“No other state-aid cases have been opened against Ireland arising from the information submitted to the commission, nor have we any indication that there are any other cases under consideration,” he said. “That is not to say that at some future point the commission might not wish to reverse that.”

Mr Kenny said that no discussion of corporate tax had taken place during the two-day EU leaders’ summit.

Mr Kenny declined to comment on a forthcoming proposal from the commission on the controversial common consolidated corporate tax base (CCCTB), which is due to be announced next week. While he said that Ireland would engage with all commission proposals constructively, he reiterated that Ireland’s 12.5 per cent corporate tax rate was “not up for grabs”.

The revised CCCTB proposal will introduce a common tax base for large companies operating in the EU, but the most contentious “consolidation” element would be deferred until a later stage.

It is understood that Ireland is broadly in favour of the first phase of the proposal in its present form, which will still need to get sign-off from the European Parliament and member states.