Nato backs Turkey on IS as Ankara confirms attack on Kurds

NATO Chief Jens Stoltenberg says the alliance stands in solidarity with Turkey at emergency meeting to discuss instability at its borders with Syria and Iraq. Video: Reuters 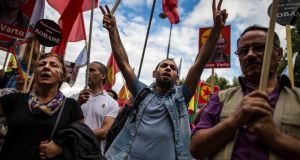 Kurds protest outside the Turkish embassy in Paris. The Turkish military confirmed on Tuesday it had used jets to target Kurdish rebels. Photograph: EPA

Nato has said it stands in “strong solidarity” with Turkey following last week’s suicide bomb in Suruk, after Nato ambassadors met for an emergency meeting in Brussels on Tuesday to discuss the escalating crisis on the Turkey-Syria border.

In a joint statement, Nato members said they “strongly condemned” the terrorist attacks against Turkey last week, adding that terrorism posed “a direct threat to the security of Nato countries and to international stability and prosperity”.

The meeting, which was convened at the behest of Turkey under Article 4 of the Nato treaty, was the fifth time an emergency meeting of this kind was held since the establishment of the transatlantic alliance in 1949.

“All allies stand in solidarity with Turkey,” Nato chief Jens Stoltenberg said, though he noted that Turkey had not requested military support during the hour-long meeting.

Within hours of the Nato gathering, Turkish president Recep Tayyip Erdogan said it was “not possible” to continue the Kurdish peace settlement because of recent Kurdish attacks on Turkish targets.

It follows last week’s air strikes on PKK camps in northern Iraq, which took place parallel to attacks on suspected Islamic State targets in the region.

The July 20th attack by suspected Islamic State militants in the Turkish town of Suruc, which left more than 30 people dead, has spawned a wave of instability in the region, throwing the delicate Turkish-Kurdish peace process into doubt.

Mr Erdogan helped forge the peace settlement with Kurdish militants, which has been in place since March 2013.

German chancellor Angela Merkel phoned Turkish prime minister Ahmet Davutoglu over the weekend, while the EU’s foreign policy chief, Federica Mogherini, spoke to the Turkish foreign minister on Saturday. Both Brussels and Berlin have urged Turkey not to jeopardise the Kurdish peace process.

“Any action taken should avoid the risk of endangering the ceasefire and the Kurdish peace process that remains the best opportunity in a generation to solve a conflict that has claimed far too many lives,” Ms Mogherini said following her phone call with Turkish foreign minister Mevlut Cavusoglu .

The moves by Turkey to also target Kurdish militants could open up difficulties for Washington, which has been relying on Kurdish fighters to tackle IS in northern Syria.

Rebecca Harms, a senior German member of the European Parliament, described Turkey’s actions against the PKK as “opportunistic” and “alarming”, adding that Nato and the EU “must make clear to the Turkish government that the attacks on Kurds are unacceptable”.

1 How one couple’s weekend away resulted in 30 Covid-19 cases
2 Taoiseach tells TD to ‘cop on’ over criticism of contact tracers asking about pubs
3 Trump urges Proud Boys to ‘stand down’ after debate criticism
4 Coronavirus: 429 new cases as vigilance urged amid rises across the country
5 Coronavirus out of control in Britain, chief scientific adviser admits
Real news has value SUBSCRIBE