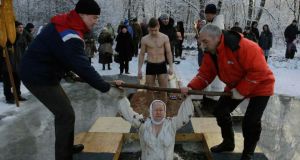 A Russian Orthodox Christian takes a dip in an icy pond during Orthodox Epiphany celebrations in the village of Strelna outside St Petersburg. Photograph: Reuters

A middle-aged woman clad in a night shirt stood on a makeshift stair above an ice bath tub, a halo of steam circling her blonde head.

Perhaps by accident or just for fun she slipped, falling into the water with an almighty splash that drew whoops of joy from all around.

As the Russian Orthodox Church celebrated the Epiphany at the weekend, tens of thousands of Muscovites turned out in temperatures below -19 degrees to commemorate the baptism of Jesus Christ in the river Jordan.

Christian revival
Frowned on in the Soviet era, religious rituals are in

revival. More than two-thirds of Russians consider themselves Orthodox Christians compared to less than 10 per cent in 1989, the final year before the Soviet Union’s demise, according to a recent poll by the independent Levada Center.

But allegiance to Russia’s dominant religion is more about cultural and historical ties than deep-seated Christian creed. Only a fraction of respondents said they attended church every Sunday or even believed in the afterlife.

An element of theatricality has crept into Epiphany christenings. Tourists taking a stroll late on Saturday looked bemused to find three large bathing tubs, as well as a heated changing tent installed on Revolution Square on the northern flank of the Kremlin. Someone somewhere was playing olde-worlde Russian folk songs while women in national dress served non-alcoholic mead at street stalls.

Although a satisfyingly cathartic sensation, “it’s more about tradition than religion”, said Felix, a Moscow-based banker, who, after going through the motions, was settling back into his designer fur coat: “Only a priest can take away your sins.”

It was even colder at the sprawling Timiryazevskaya pond on the northern outskirts of Moscow where a line of burly men with tattoos was lining up to take a dip.

Among those disobeying instructions to stay off the ice and photograph love ones from afar was Andrei, a retired barman, who, his teeth chattering with cold, had watched events since midnight when a priest had come by to bless the waters.

More than 1,500 people had crossed the pond to reach the pool, he said, beating a trail in the snow like “antelopes in Africa”. Discarded flip flops lay on the frozen shore, evidence of the modern day revival of an ancient tradition.