Among the fatalities was Maurice Dease, an Irish recipient of the Victoria Cross

The Belgian town of Mons paused to reflect during what will be the first of dozens of major commemoration events along the Western Front over the next four years. Video: Ronan McGreevy 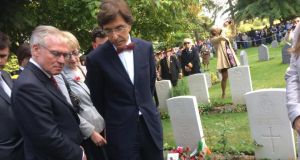 At the stroke of midday in the Belgian town of Mons on Saturday, the church bells of Sainte-Waudru rang out the national anthems of the protagonists in the first great clash of arms between Britain and Germany in the first World War.

Ireland was only an aspirant nation when the Battle of Mons took place on August 23rd, 1914, but Amhrán na bhFiann was played along with the Belgian, British, German and French national anthems.

The town of Mons – which was full, mostly with British visitors – paused to reflect during what will be the first of dozens of major commemoration events along the Western Front over the next four years.

The Irish Great War Society recreated a famous photograph in the town square of British soldiers resting before they were swept into the great carnage.

Earlier, in sunshine and showers as it had been 100 years ago to the day, hundreds of people turned up at Nimy Bridge, a rusting railway bridge outside Mons where Irishman Maurice Dease and Sid Godley earned the first Victoria Crosses of the Great War.

The day of commemoration continued with the laying of a wreath at the Royal Irish Regiment monument in La Bascule, a crossroads outside Mons where Cork-born Quartermaster Sgt Thomas William Fitzpatrick led 40 of his men in holding up the German advance long enough for the British Expeditionary Force to retreat despite overwhelming odds.

For the second time in a month, Mons’s beautiful St Symphorien military cemetery was the site of a war commemoration. The event on August 4th, the official British commemoration, was attended by President Michael D Higgins.

This time it was the turn of the people of Mons led by the mayor of Mons who also happens to be the outgoing Belgian prime minister Elio di Rupo. After an ecumenical service in French, German and English, Mr di Rupo paused at the grave of Dease in the company of Irish Ambassador to Belgium Éamonn Mac Aodha.

Standard bearer Dan Steele said those Irish men who died should be remembered irrespective of their backgrounds. “These men paid the ultimate sacrifice for what they believed in at the time,” he said.

Mons was a bloody battle, but casualties were light by the standards of the carnage that was to come. The battle is best-remembered for the legend of the angel of Mons, named after the short story which held that angels intervened to save the outnumbered British Expeditionary Force from annihilation.

A specially commissioned animated representation of the legend was projected on to the front of the town hall in Mons on Saturday night.

The events in Mons occurred just as a paving stone in honour of Dease, paid for by the Commonwealth War Graves Commission, was unveiled at Glasnevin cemetery on Saturday evening.

The commemorations move on to Le Cateau tomorrow and to the French town of Etreux on Wednesday, where the Royal Munster Fusiliers made a famous rearguard stand against the advancing German army.