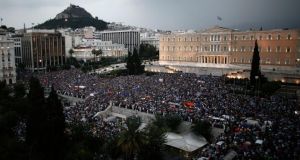 Protestors gather during a demonstration in support of the European Union (EU) in Athens, Greece on Tuesday. Photograph: Bloomberg

Euro zone finance ministers are to hold an emergency conference call on Wednesday to consider Greece’s request for a third bailout, after a last-minute appeal from Athens to extend the second Greek programme was rejected on Tuesday night.

The expiration of the bailout and Greece’s failure to meet an International Monetary Fund repayment on Tuesday night leaves the country without access to external funding for the first time in five years, furthering fears it is teetering on the edge of an exit from the euro area.

Failure to secure a breakthrough from the eurogroup ensured the country missed the €1.54 billion payment. Though the non-payment is not likely to be technically classified as a default, it constitutes the largest experienced by the IMF since its establishment in 1945, and the first by a developed nation.

Gerry Rice, Director of Communications at the International Monetary Fund (IMF), made the following statement: “I confirm that the SDR 1.2 billion repayment (about €1.5 billion) due by Greece to the IMF today has not been received. We have informed our Executive Board that Greece is now in arrears and can only receive IMF financing once the arrears are cleared.

“I can also confirm that the IMF received a request today from the Greek authorities for an extension of Greece’s repayment obligation that fell due today, which will go to the IMF’s Executive Board in due course.”

While the two-page letter sent by Mr Tsipras calls for funds to cover the country’s financing needs for the next two years as well as debt restructuring, it made no reference to the austerity measures that have been a sticking point with creditors in the failed negotiations.

EU officials have said that any third programme would include most of the demands in the most recent bailout proposal, including controversial changes to the pensions and VAT system.

While finance ministers’ decision to continue discussions on Wednesday sparked hopes that a last-ditch deal could be reached, eurogroup chairman Jeroen Dijsselbloem said the request for a third bailout would only be considered after Sunday’s referendum in Greece on the terms of its EU-IMF bailout terms.

Mr Dijsselbloem added that while euro zone countries were entitled to request a programme, the Greek government’s stance was making constructive discussions difficult.

There were signals from official circles on Tuesday night that the €60 withdrawal limit imposed in Greece this week could be reduced further as the crisis continues.

In an official statement confirming the expiration of the second Greek bailout at midnight, the head of the ESM Klaus Regling said it was “regrettable” that the programme was expiring without any follow-up arrangement.

He added that the country had been on a good path towards strong growth until the second half of last year. “The many sacrifices which the Greek people had to make were paying off.”