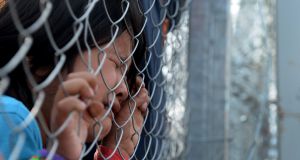 A migrant girl at the Greek-Macedonian border. Macedonia confirmed is only allowing Syrian and Iraqi refugees through. Photograph: Nake Batev/EPA

Thousands of people are massing at the Greece-Macedonia border after Balkan states imposed new restrictions on refugees and migrants trying to reach western Europe.

Since Sunday, Macedonia has only let Syrians and Iraqis with identification papers cross into the country from Greece and travel north, blocking all other nationalities including Afghans, who were previously allowed to enter.

Balkan states now transport Syrians and Iraqis by train directly from the Macedonia-Greece border to Slovenia’s frontier with Austria. They are only allowed off the train in Macedonia, Serbia, Croatia or Slovenia for medical reasons, or if they want to claim asylum in one of those countries.

The trigger for the tighter Balkan restrictions was Austria’s announcement that it would allow only 80 people per day to claim asylum, and permit a maximum 3,200 people each day to cross its territory en route to Germany.

European Union and non-EU states are taking unilateral and group measures despite criticism of such moves from Germany and top EU officials, as Berlin and Brussels grapple with the Continent’s worst refugee crisis since the second World War.

With spring set to bring an even greater influx of asylum seekers than last year, and a German plan to distribute refugees around the EU in tatters, aid groups are alarmed at the bloc’s inaction as pressure soars inside an unprepared Greece.

Aid groups said about 5,000 people were stuck at Greece’s border with Macedonia, and at least 3,000 more were in Athens waiting to travel north.

“In Serbia, the increasing arbitrary pushbacks from Slovenia and Croatia are leaving entire families stranded at the borders with no reliable information,” said Ms Ponthieu, MSF’s humanitarian adviser on displacement.

“Likewise, in a sadly predictable domino effect, the restrictions introduced first in Serbia and now at the border between Greece and [Macedonia], which prevent Afghan men, women and children from crossing, will make an already fragile group of people extremely vulnerable.”

As MSF warned that those trapped on Balkan borders were “easy prey for smugglers and at a heightened risk of violence and exploitation”, the EU’s police agency, Europol, called people-smuggling the “fastest growing criminal market in Europe”. ”

It said people traffickers made up to €6 billion in 2015, a figure that could “double or triple if the scale of the current migration crisis persists in the upcoming year”.

Launching a new European migrant smuggling centre in The Hague, Europol director Rob Wainwright said there was little evidence that people linked to terror groups were using the refugee crisis to enter Europe in large numbers.

“Far less than 0.01 per cent of terrorist suspects have had migrant links,” he said.