Migrants in Greece break gate on border with Macedonia

Teargas fired at migrants attempting to break through border into Macedonia, as thousands remain stranded for days on Greek side. Video: Reuters 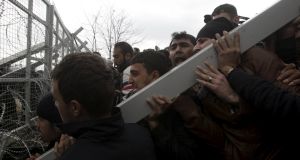 Refugees and migrants try to bring down part of the border fence during a protest at the Greek-Macedonian border, near the Greek village of Idomeni, on February 29th, 2016. Photograph: Alexandros Avramidis/Reuters

Police have fired tear gas and stun grenades after a few hundred migrants angry at long delays in entering Macedonia broke a gate on the border with Greece.

The protesters, who were chanting “Open the border” and throwing stones at Macedonian police, were repelled.

There were no reports of arrests or injuries from the latest clashes.

Police said 500 people earlier pushed their way past Greek police to reach the gate, which is used to let trains through at the border crossing.

About 6,500 people are stuck on the Greek side of the border.

Some have been there for up to eight days with little food or shelter as Macedonia only accepts a small number of people every day.