Migrant crisis: ‘They might as well kill me if they send me back’

The Greek coast guard rescues 173 migrants off the coast of Lesbos island as Greece begins to return people to Turkey under an EU-Ankara deal. Video: Reuters 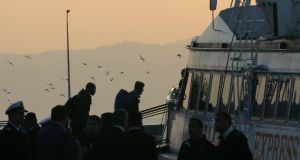 Migrants board a ferry in the port of Mytilene, Lesbos island, Greece, on April 4th. Photograph: Orestis Panagiotou/EPA 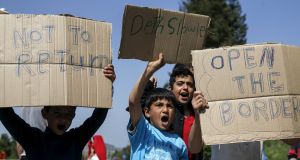 Migrants and refugees shout slogans as they block the highway near the Greek-Macedonian border near the village of Evzoni, Greece. Photograph: Marko Djurica/Reuters

Just hours before the first deportations of migrants from Greece to Turkey under the European Union’s controversial agreement with Ankara took place, the people behind the fence at the main detention centre on Lesbos island were generally uninformed about the impending operation and what the terms of the EU-Turkey deal will mean for them.

Only a day on the island, Afghan national Mohammed Samir (25) maintained he only learned upon making the sea crossing to Greece that people who arrived since March 20th, when the deal came into force, were ultimately facing deportation.

“They might as well kill me and drop me in the ocean as send me back,” said Samir, speaking through a wire fence, before detailing his involvement as a contractor for biometrics with the Nato-led security mission in his native country, work for which he had been attacked and had received death threats.

Rahaf, a young Syrian woman from the Palestinian refugee suburb of Yarmouk in Damascus, expressed her disbelief that Syrian nationals who arrived after the March 20th watershed could also be deported.

“My mother, sister and two brothers are in Germany and I’m here with my father.

“We have not been treated well in Turkey, so they mustn’t send us back there,” she said, as others in her group said they faced economic exploitation and physical violence on the other side of the Aegean.

When the deportations from another section of the Moria detention centre got under way at dawn, it emerged that Afghans and Syrians were among those listed for return.

“All the deportees were issued with return decisions by the Greek authorities. We are only involved at the end of the process,” Ewa Moncure, spokeswoman for the EU’s border agency Frontex, said.

Asked if the deportees were aware of their rights to claim asylum, she said that was a matter for the Greek authorities.

“No one can be returned without a decision being issued.” 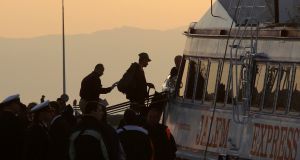 Migrant Crisis: Images of the Day

The two Syrians on board had voluntarily requested their return to Turkey, Major General Zacharoula Tsirigioti, head of the Greek aliens and border protection unit, told journalists at Mytilini.

From nearby Chios, where a number of detained migrants walked out of a detention centre at the weekend, 66 migrants were deported, among them 10 women.

Most of those sent back from that island were Afghans, but they also included Iranian, Pakistani, Indian, Somalian, Ivorian and Congolese nationals.

Returnees, one of whom was a woman, did not appear to be handcuffed and were each paired with a Frontex officer on the half-hour journey to Turkey.

The police escorts were drawn from law-enforcement agencies from France, Estonia, Latvia, Denmark, Lithuania and Luxembourg as well as Greece, Frontex said.

Photographs taken from inside one of the vessels showed passengers seated in rows of four, with Frontex officers, most of them wearing hygiene masks, sitting on the inside and outside row.

“I felt very sad for these people but somehow this way of migration should stop as hundreds of people have already drowned in the Aegean.

“Even if I don’t fully agree with the approach, I hope it it at least stops the deaths and that another way is found to help these people.”

While many questions remain as to the processing of the migrants during their period of detention in Greece, a spokeswoman for the UN refugee agency said it had spoken to them beforehand and explained their rights to them.

However, the deportation operation was criticised by human rights groups as lacking transparency.

“No one has informed human rights organisations on how these people were processed and whether they received a fair process.

Mass returns are illegal and this is the reason it happened in a hush-hush manner,” said Wenzel Michalski, Germany director of Human Rights Watch, which said it has been denied access to the Moria camp to interview detainees.

Michalski said most of the deportees have few or no rights in Turkey as it has not signed relevant appendixes to the Geneva convention extending refugee status to non-Europeans.

“Only the Syrians will get some form of protection but this is minimal. The others will get nothing.”

The deportations were accompanied by protests from activists at Mytilini port who held up a banner stating “Ferries for safe passage: No to deportations.”