Republic to voice concerns at EU over cost of 4,000 refugees on domestic expenditure

Video posted online shows scores of migrants clamouring for food at a hangar at a reception centre in Roszke, Hungary, on border with Serbia as Hungarian police throw food. Video: Reuters 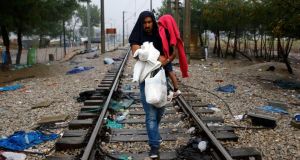 A Syrian refugee carries his child as he crosses the border from Greece into Macedonia. Photograph: Reuters

Ireland is to join a number of EU countries in calling for a change in EU budget rules to reflect the financial cost of the refugee crisis, as the Government confirmed yesterday it would opt in to the EU’s refugee programme and accept a total of 4,000 refugees.

EU finance ministers gather on Friday for two days of meetings in Luxembourg, amid concern from member states that the cost of accepting extra refugees could eat into other domestic spending budgets.

A group of member states, led by Austria, has already raised the issue with the European Commission, with Italy and Greece also expected to back the call to relax EU debt and deficit rules. The issue is expected to be discussed on the margins of the meeting.

Speaking in Luxembourg ahead of the gathering, at which the issue of corporation tax is also expected to feature, Minister of State Simon Harris said that while Ireland’s priority was to provide humanitarian help to refugees, the EU should also ensure that member states are supported.

“It is prudent and sensible that the commission address this, to ensure countries that respond in a humanitarian and generous way are given the ability to do this without impacting on deficit rules,” he said.

On Thursday, the Government confirmed Ireland would settle 2,900 refugees – from Syria, Eritrea and Iraq – under the EU’s refugee relocation programme. The decision to increase the number of refugees from 3,000 to 4,000 was made during the day’s early-morning Cabinet meeting.

A senior Government source said the memorandum to Ministers had recommended a figure closer to 3,000. “Ministers from both sides quickly agreed that Ireland’s approach needed to be open and generous.”

With relatives arriving into Ireland under family reunification rights, the figure could rise to 17,000 over time. The first intake will be initially accommodated in temporary centres. But Minister for Justice Frances Fitzgerald and Tánaiste Joan Burton dismissed any suggestion those coming in would be left in the same situation as asylum seekers in direct provision.

Officials from the Irish immigration service will go to the continent where these migrants are now located, and will work with EU colleagues to select those to come to Ireland.