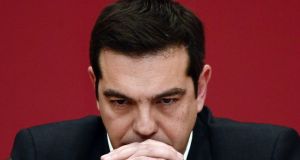 Should Alexis Tsipras lead his leftist Syriza party – as is widely expected – to victory in Sunday’s general election in Greece, it could herald the end of 40-year history in which power in the financially troubled Mediterranean country has alternated between the conservative New Democracy and socialist Pasok parties.

Very much a child of the post-dictatorship era – he was born four days after the collapse of the seven-year junta in July 1974 – Tsipras will also stand a chance to become the country’s youngest prime minister in living memory and its first leftist leader.

His and his party’s meteoric rise to prominence is no small feat considering he was a relatively unknown entity to most Greeks a decade ago, when he was a member of the leadership of Syriza’s forerunner, Synaspismos, a party that generally found itself struggling to cross the parliamentary threshold.

Tsipras’s first flirtation with politics was at secondary school, where he played a prominent role in a wave of student sit-ins of school buildings. Interviewed on state television as one of the leaders of the occupations, Tsipras, almost Elvis-like with his large crop of gelled-up black hair, explained how he thought political goals were best achieved.

“Without protest there can be no achievements,” the 16-year-old said, adding that it was the right of students to skip class and demonstrate whether their parents agreed or not.

Around the same time, he became involved in the youth wing of the communist KKE party, then the country’s third political force and more dependent on the Soviet Union than the country’s Eurocommunist party that would develop into Syriza.

When those two communist parties forged an alliance in 1990, and briefly formed a historic coalition with the conservatives to oust the socialist prime minister Andreas Papandreou from power, Tsipras ended up remaining with the reformist left after hardline KKE members went back to their own party.

Now with nationwide recognition, he was subsequently groomed to take over at the helm of Synaspismos, which by then was morphing into Syriza, a wider coalition of diverse left-wing groups. In 2008 he eventually became leader, at the age of 33.

Elected to parliament in 2009, a year after he became Syriza leader, Tsipras saw his party’s popularity explode as the financial crisis hit the country, transforming Syriza in less than three years from a minor party that took less than 5 per cent in elections to one of 27 per cent.

Not short of confidence, he was viewed by his many detractors as an upstart, too smart for his own boots. Through hard work and experience, Tsipras and his close associates developed his image, in an effort to present him as a leader and prime minister material.

Examples include his efforts to improve his English as well as his overtures to church leaders, in a clear attempt to assuage voters in the relatively religious country that they have nothing to fear from his being an atheist.

But his detractors within Greece remain numerous. A common view, one shared by incumbent prime minister Antonis Samaras and other European leaders, is that he’s a dangerous populist who simply doesn’t understand how the real world works.

A father of two young boys, one of whom has the middle name Ernesto (after Latin American revolutionary Ernesto “Che” Guevara), Tsipras lives with his partner, who was his childhood sweetheart, in central Athens.

Asked recently whether he would start wearing a tie if he became prime minister, Tsipras replied that if he could meet the pope in the Vatican without one – as he did last September – then he probably didn’t need one.