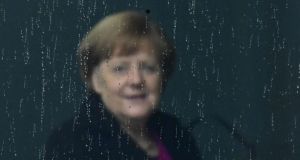 It’s exactly one year since Angela Merkel began her fourth term since 2005, promising on March 14th, 2018, a “new dynamism for Germany” and a “fresh departure for Europe”.

Ambitious words for a coalition that came together six months after election night – a new record – with more comings and goings than a British farce.

As the 1,000-day Brexit vaudeville enters its final act in London, a growing topic of discussion in Berlin is Merkxit. After 4,860 days of Angela in office, how many more?

Last December, after a squabble-filled summer and a series of regional election defeats, Merkel stood down, after 19 years, as leader of her centre-right Christian Democratic Union (CDU).

Week by week, she is increasingly deferring to her party successor, Annegret Kramp-Karrenbauer (AKK).

It was the new CDU leader, not the chancellor, who replied to French president Emmanuel Macron’s impassioned EU reform proposals. But AKK’s sober response could have been ghostwritten by the cautious chancellor.

Even before she leaves, the Merkel legacy includes few big ideas on Europe, a cooling economy, uncertain energy goals and climate targets evaporating into diesel-polluted air.

On the domestic front, the coalition has delivered on many promises: lower healthcare premiums; €5 billion for kindergartens; an immigration law; worker-friendly labour reforms.

But not even new leaders of the coalition partners have improved the strained atmosphere between the CDU, its Bavarian allies and the centre-left Social Democrats (SPD).

Hanging over everything is a prickly political question, one that is now the subject of a cabaret show. With a nod to Merkel’s maternalistic nickname, it’s called: “Wohin mit Mutti?” (What to do about Mummy?)

The show’s poster suggests using her as a stylish standing lamp. It will be some time before she graces a CDU election rally stage again. Party officials concede that her 2015 refugee crisis policies polarise too many voters.

As she gets down to work, the new CDU leader, ahead of this year’s EU and autumn regional elections, is polishing up her party’s long-neglected conservative profile.

Meanwhile the SPD, controlling the finance ministry through Olaf Scholz, is rediscovering its leftist, social spending roots. But neither wants to abandon the political centre, or be seen to provoke – and risk being blamed for – an early election.

With political sands shifting in Berlin, the first CDU figures suggested in public this week that Merkel should pack her bags. And, though not senior party figures, what they said cannot be unsaid.

Mid-ranking SPD voices hit back: if Merkel plans handing the chancellery keys to her CDU successor, she can think again. If Merkel goes, the SPD argues, the coalition goes with her.

If we get that far, of course. Though struggling on just 17 per cent in polls, some optimistic SPD souls suggest toppling the government after the summer by activating a review clause baked into the coalition agreement.

But Germany’s post-war constitution, responding to the Weimar-era chaos that led to the Nazis, leaves little wriggle room for bringing down a government early.

One option is a “constructive” no-confidence vote from the opposition, with a new coalition ready to go.

Some in the SPD see that option in the untested coalition option with the booming Greens and Left Party.

An important hurdle to this option fell this week, with the departure from the Left Party’s front bench of Sahra Wagenknecht, a popular, provocative hard-left ex-Stalinist.

The post-Merkel CDU, meanwhile, could envision a three-way coalition with Greens and the Free Democratic Party (FDP) – but that is unlikely without fresh elections.

And getting back to the ballot box early is tricky because it would require Merkel to table a confidence motion she intended to lose. That only works with the co-operation of President Frank Walter Steinmeier – a long-serving SPD man.

For now, AKK insists she is happy with the status quo: “We have the chancellor we want – and I, at the head of the party, want that Angela Merkel remains chancellor.”

Voters are undecided. After 5,000 days, nearly two-thirds (63 per cent) of Germans would welcome a premature end to this coalition. But 67 per cent would also like Angela Merkel to serve out her term. Work that one out.