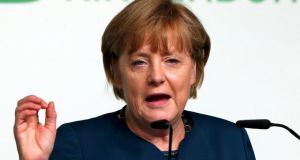 German chancellor Angela Merkel is opposed to handing more powers to the European Commission and agrees with France that European Union governments should work more closely on economic policy, she said in an interview published today.

Berlin has traditionally backed a stronger Commission but the EU’s Brussels-based executive has seen its influence wane during the euro zone debt crisis, while Germany, Europe’s biggest economy, has increasingly steered decision-making.

“I see no need in the next few years to give up more powers to the Commission in Brussels,” Merkel told the weekly Spiegel magazine, adding that she agreed with French president François Hollande on EU member states co-operating more on economic issues.

“We are thinking for example of the labour and pension markets but also of tax and social policy. Economic policy co-ordination in Europe is far too weak, it must be strengthened and this is rather different to giving more competences to Brussels,” she said.

During talks in Paris last Thursday, Dr Merkel and Mr Hollande backed closer economic co-ordination between euro zone member states. They will send a joint paper on future euro zone governance to fellow leaders ahead of a June EU summit.

Mr Hollande also took a swipe at the EU executive over its detailed proposals last week on how to overhaul France’s ailing economy, saying the Commission could not “dictate” reforms to member states.

His nationalist tone upset not only Brussels but also some members of Merkel’s centre-right coalition.

Dr Merkel’s comments on the Commission may stir unease among smaller EU member states that see the supranational executive as the defender of their interests in a Europe that may otherwise fall even more under the sway of the larger countries.

The interview comes just days after Germany and several other EU states came out against imposing hefty duties on solar panel imports from China, undermining efforts by Brussels to pressure Beijing on its trade practices.