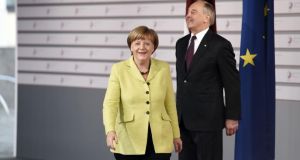 Latvian president Andris Berzins welcomes German chancellor Angela Merkel at the House of the Blackhead in Riga at the start of the EU Eastern Partnership Summit. Photograph: Alain Jocardalain/AFP/Getty Images

German chancellor Angela Merkel has attempted to ease Russian concerns ahead of the Riga summit, stressing that the EU’s eastern partnership policy was “not an instrument for pursuing an expansionist EU policy”.

But Dr Merkel also underlined the European Union’s commitment to its eastern neighbours amid criticism that the EU’s eastern policy is losing credibility in light of the ongoing conflict in Ukraine.

“We will further support our eastern neighbours on their path to a society based on democracy and the rule of law,” the chancellor said, adding that every country has the right to choose if it wants to embrace the values of the EU.

Arriving at the fourth Eastern Partnership summit on Thursday evening, Minister of State Dara Murphy said the summit offered an opportunity to “accentuate the positive” following the events of the past 18 months, which have seen violence escalate in Ukraine since the Vilnius summit of November 2013.

“I think it is very important that all of us in the European Union continue to work with our eastern partners,” Mr Murphy said. Ireland was the most westerly EU member state represented at the summit, but it would also play its part, the Minister said.

Representatives from all six countries, including the presidents of Ukraine, Moldova, Georgia, and Armenia, are attending the gathering.

But while leaders are expected to “reconfirm the high importance they attach to the Eastern Partnership”, according to the latest draft of the declaration seen by The Irish Times, the statement falls short of offering the possibility of future EU membership or further concessions on visa-free travel to partners.

Moldovan citizens were granted visa-free travel to the EU in April 2014, but Ukraine and Georgia have struggled to meet the criteria set by the European Commission.

The draft conclusion also outlines the EU’s aim to develop “differentiated relations” with the six countries, reflecting the fact that the political and economic links between the EU and its six eastern partners vary vastly.

Only three of the countries (Ukraine, Moldova and Georgia) have signed association agreements with the EU.

British foreign secretary Philip Hammond said that Mr Cameron would “of course . . . be looking to engage with his partners, to start to talk to them about the reform agenda” at today’s summit.

Mr Hammond said the bid to renegotiate the relationship with the EU had been “wholeheartedly endorsed” by the British people in the election.

A spokesman for the German government also confirmed that Greek prime minister Alexis Tsipras will hold informal talks with Dr Merkel and French president François Hollande on the margins of the summit.

The Greek government has warned that it could default on its repayments to lenders if a deal is not agreed with creditors by the end of the month. Greece faces €1.5 billion in IMF repayments next month, including a €305 million repayment on June 5th.