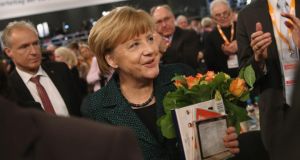 German chancellor and chairwoman of the German Christian Democrats Angela Merkel after she was re-elected as party chairwoman at the annual CDU party congress in Cologne. Photograph: Sean Gallup/Getty Images

German chancellor Angela Merkel has secured her 15th straight year as head of the ruling Christian Democratic Union (CDU) with 96.7 per cent support, insisting her party is “good for Germany”.

Expectations that the CDU annual conference in Cologne would revive the Merkozy partnership with Nicolas Sarkozy came to nothing after the former French president and UMP leader was persuaded to stay at home.

In a 70-minute address, Dr Merkel earned cheers for attacking the “bankruptcy” of the Social Democratic Party (SPD), her Berlin ally, for joining a state coalition in Thuringia as junior partner under the hard-left Linke. “How much smaller does the SPD want to make itself?” she asked.

Dr Merkel arrived and, after a 10-minute standing ovation for her address, left Cologne the unquestioned leader of Germany’s dominant political party. One year into her third term, three-quarters of Germans like her while her CDU is polling at 41 per cent – a comfortable 15-point lead on the SPD.

However, with an eye on the new state government in Thuringia, Dr Merkel warned that a strong CDU was the only insurance against an SPD alliance with the Linke after the next federal election in 2017.

In her address, Dr Merkel said her major achievement in office was striking a balance between fiscal restraint and social responsibility, citing as proof Germany’s first balanced federal budget in four decades.

In Catholic Cologne, the Lutheran CDU leader dismissed claims that her balanced budget – dubbed the “black zero” – was a political holy eucharist to be “carried around and adored in a monstrance”.

Far more, she said, finance minister Wolfgang SchäuÃ¤uble&#8217;s success at balancing Berlin’s books was a far-sighted effort to secure Germany’s fiscal future. “We have called time on living on the never-never,” she said.

That Berlin’s wariness of debt-fuelled spending extended to its European partners was not a case of “German pernicketiness”, the chancellor added, but of EU members maintaining credibility by sticking to stability and growth rules beefed up in the euro crisis.

“If we don’t do that . . . we will squander the trust we have won back,” she said, warning that the crisis was far from over.

The most prominent absentee in Cologne was Mr Sarkozy, the newly elected president of the UMP, who invited himself last week without consulting Dr Merkel. The CDU leader feared a fiery Sarkozy speech against French Socialist president François Hollande would offer only political pain and no gain.

Instead of offering him a stage in Cologne, she headed the UMP leader off at the Rhine and offered him a chance to reboot their Merkozy alliance soon in Berlin.