Merkel and her moral stance on the refugee crisis

World review of the year: The refugee crisis will make or break the German chancellor 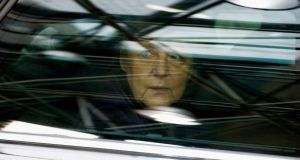 Angela Merkel: Germany will succeed because mastering massive challenges is what defines the Germans as a people, she has told her party. Photograph: Getty Images

Sandra Kühnert has taught Irish dancing in the German capital for almost 13 years. For the past three years her Jigs and Reels school had its first permanent home in the Prenzlauer Berg neighbourhood. About 70 dancers of all ages, and from Ireland to Israel, came each week to dance on the professional floor Ms Kühnert had installed for €4,000. But now the school has been evicted and the building is being turned into a hostel for refugees.

“I feel betrayed,” said Ms Kühnert. “For myself, because it took so long to build up the school to this point, and for the students for whom dancing is such an important part of their lives and their well-being.”

It’s a similar story across Berlin and the rest of Germany. After years watching news reports about the distant dramas in Greece and Italy, the summer brought a rude awakening and wave after wave of desperate people to Munich central station.

After the eurocrisis warm-up act, a refugee exodus of biblical proportions has left Europe a house divided. And it is only beginning.

In Germany, all available buildings have been requisitioned to house refugees, from school sports halls to Berlin’s Nazi-era Tempelhof airport – one of the world’s largest buildings. And still it isn’t enough for the one million extra people now living in Germany.

The refugee crisis, shot through with fear of Islamist violence, has seen German Zukunftsangst – fear of the future – make a dramatic comeback. Almost two-thirds of people here (64 per cent) look to 2016 with concern, according to a survey by GfK, a German market research institute, for a Hamburg foundation. Despite a robust economy, the number of fearful young people – traditionally more optimistic than their parents – has more than doubled in two years to 42 per cent.

This year’s big political winner is the Alternative für Deutschland (AfD). After starting life as an anti-bailout party, the AfD jettisoned its economist leader this year, took a hard right turn on migration and has doubled its support in polls to about 10 per cent. Next March, a state election in the southwestern state of Baden-Württemberg will be an important barometer of public mood, both for the AfD and its mainstream political rivals.

Something dramatic is brewing in Germany as ingredients have been thrown together in a pot: suspicion of politicians, the media and democratic order; resentment towards the post-crisis EU; real feelings of exclusion in Germany’s growing have-nots; and prosperity chauvinism from well-off Germans. This mix is coming to the boil, with one-time taboos evaporating off rapidly. Sprinkled on top is a catalyst dressing called Pegida: the anti-Islam group that has mastered social media manipulation to mobilise 10,000 weekly marchers in Dresden.

Pegida’s founder Lutz Bachmann is a gifted orator who sounds like a pally Saxon secondhand car salesman, but who is plying “I’m not racist but . . .” xenophobia.

On Facebook, whether posing as Hitler or dubbing refugees “cattle”, Bachmann’s calibrated provocations have delighted supporters that range from neo-Nazi into Saxony’s conservative, inward-looking middle class. The Pegida-AfD online debate is fire accelerant in the real world where, each day, somewhere in Germany, a refugee home is set alight.

Mainstream politicians at local level are now trapped between two fronts: a rising populist opposition and a daily refugee struggle with dwindling financial resources and public good will.

Chancellor Angela Merkel, as federal leader, has different concerns. Setting her sights on a pan-European solution, she has resisted pressure for a German migration cap, saying there can be no arbitrary cap on the universal human rights to refuge and asylum.

Germany will succeed now, she told her CDU party in early December, because mastering massive challenges is what defines the Germans as a people: from postwar rebuilding of Hitler’s physical and moral ruins to reuniting their country in peace and prosperity.

But all it has done is buy Dr Merkel time until various measures – all of which are beyond her control – hopefully kick in: an uneasy refugee co-operation with Turkey; “hot spot” registration-and-distribution centres on EU borders; and an upgraded border police service.

The refugee crisis will make or break Merkel, but she has accepted that the challenge is the defining issue of our times – morally, politically and economically – and requires politicians to think big.

Back in Berlin, Kühnert has started the hunt for a new premises to save her Irish dance school.

Though some might forgive her feeling ill-will towards refugees, she refuses to think like that. But she is shocked at how many friends and online acquaintances do.

“I was born in 1982 and we grew up thinking Germany was immune from a drift to the right,” she said. “But things are changing, solidarity is draining away before our eyes. This is not the same country as a year ago.”