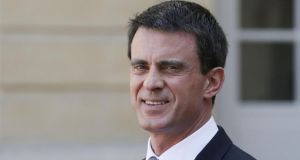 French prime minister Manuel Valls arrives in Dublin today for a two-day visit. Taoiseach Enda Kenny may be pleasantly surprised by the French leader’s message. Pragmatism, realism and reform are not necessarily what one expects to hear from a French socialist politician.

Valls is the opposite of president François Hollande, whom Kenny knows from meetings of the European Council. Hollande is jovial, ambiguous and so eager to reach a “synthesis” of all points of view that his interlocutors are sometimes uncertain where he stands.

Valls is serious, direct, determined and intense. Born 52 years ago in Barcelona to a Catalan painter and a Swiss-Italian mother, he obtained French nationality at the age of 20. In a France 3 documentary broadcast this month, Valls’s mother Luisa recounts how, as a child, Valls would get out of bed to make sure his slippers were perfectly aligned and how he knew if anyone had touched his books. That obsession with order made him an effective and popular interior minister from 2012 until 2014, when Hollande appointed him prime minister.

Valls has what the Spanish call la mirada fuerte – the penetrating gaze. He has proven to be a formidable orator in the national assembly. And contrary to the French tradition which makes a shock absorber of the prime minister, Valls continues to be much more popular than the president. He’s considered a shoo-in for the socialist presidential nomination in 2022. If Hollande does not stand for re-election in 2017, Valls is the obvious alternative.

Though his presidential ambitions are well known, Valls has been faultlessly loyal to Hollande. In conversation, he is careful to allude to the president, for example when he defines the executive couple’s objective: “What we want, with the president of the republic, is the return of growth and a drop in unemployment . . . that’s what we’ll be judged by.” Above and beyond jobs and growth, Valls says: “What I would like to leave is a state of mind, a country that looks to the future with greater confidence and serenity; for the French to be more proud of themselves, of what they are, of what France is.”

To “ward off the fear of decline”, Valls says, France must shed its “fascination for a past that never existed – the idea that ‘things were better before’,” instilled by a number of French intellectuals and the far right.

Valls believes that foreign perceptions of France are improving, because of French military intervention against jihadist groups in Africa and the Middle East and because “the French people reacted to the attacks in January [which killed 17 people] with great dignity. The marches were the largest public demonstrations since 1945, in defence of freedom, particularly freedom of expression.”

Decline is not just a French problem, he says. “It is a European problem . . . If we are not capable of restarting economic growth while at the same time counting in the affairs of the world, Europe will exit history. The European project, which is the most extraordinary of recent decades, will be destroyed by fear, decline and the rise of populism.”

Valls has been the most vocal critic of Marine Le Pen’s National Front (FN), which is now supported by a quarter of the French electorate. The extreme right-wing party’s founder, Jean-Marie Le Pen, has been sidelined, but Valls says the FN is more dangerous than ever.

“The father and daughter are from the same mould,” he says. “Dozens of National Front candidates in the [March] departmental elections made anti-Semitic, xenophobic, racist, homophobe and sexist remarks. There’s a tactical difference between the father and daughter on how to gain power. But they think the same way.

“Especially, the National Front is a populist, anti-European party that wants to take France out of the European Union, the euro and the Common Agricultural Policy,” he says. “The National Front could make it to the run-off in a presidential election . . . Marine Le Pen represents a more serious danger than her father.” Dangerous On Tuesday night, Le Pen attended a Time magazine gala in New York for the world’s alleged 100 most influential people. “She certainly exerts a form of influence in our country: harmful interest,” Valls says. “If important media don’t recognise the danger she represents for our country, it’s a form of blindness. One must be very careful. There is sometimes a form of fascination in the press, in democracies, for those who fight the values of democracy. This fascination is dangerous.”

The extreme right and jihadism “feed one another”, he says. “Both are against the French model of tolerance and le vivre-ensemble [living together].” After the attacks in January, Valls shocked many by speaking of the “territorial, social, ethnic apartheid” that make French banlieues a breeding ground for radical Islam. On April 17th, he announced a €100 million programme to combat racism and anti-Semitism through the education and judiciary systems.

Valls also tells the truth about the economy: that rejection of the free market is “absurd”, that if it is to regain competitiveness, France must embrace modernity and globalisation. His calls for reforming the 35-hour working week, unemployment benefits, the pension system and the Byzantine, 3,000-page French labour code have made him the bete noire of what he calls “the old-fashioned left”.

Back in 2009, then secretary general Martine Aubry threatened to expel Valls from the Socialist Party when he suggested she change the party’s name.

So far, the results fall short of what Valls and economy minister Emmanuel Macron, the government’s other leading reformer, might wish. But the French public and Valls’s European interlocutors are nonetheless impressed.

“He’s certainly perceived as a dynamic and very determined leader who is not going to be deflected from reform,” says a European diplomat.

The same diplomat says Valls is reforming France “by stealth”. Small reforms pushed through by Valls and Macron, such as the deregulation of coach transport, Sunday trading and speeding up the labour courts, will, they hope, reach a type of critical mass.

Asked why he has not formally done away with the 35-hour working week and retirement at age 60, Valls says that in practice both these totems of the traditional left have been abandoned.

France has three times obtained two-year extensions of the EU requirement that deficit spending not exceed 3 per cent of GDP. France has promised to comply by 2017 and will exceed the deficit target set by Brussels for this year, Valls notes.

“We’re working to restore the competitiveness of our businesses by reducing the cost of labour,” he says. “That represents €40 billion in cuts in social charges on business, of which €25 billion are already in place . . . At the same time, we’re saving money, €50 billion over three years, which has never been done before by a French government. I believe we can be more efficient and spend less, although we have huge costs, particularly military.”

France, Valls says, “still needs a strong state to provide security, to prepare the future through education, to run our healthcare system. That is what the welfare state means, adapted to today’s requirements.”

But as opposed to Ireland, Spain and Portugal, Valls says: “We have not carried out austerity policies. When you create 60,000 jobs in the education ministry over five years, when you create hundreds of jobs for policemen, gendarmes and judges, and when you freeze but don’t reduce civil servants’ salaries, that is not an austerity policy.”

Valls is engaged in a delicate balancing act. In the run-up to the Socialist Party congress in June and the 2017 presidential election, he must preserve a semblance of unity on the French left. At the same time, he’s under pressure from Berlin and Brussels to reform France more profoundly.

“We do not want to enact austerity policies,” he says. “We must do nothing that would break growth.” Thanks to low interest rates, the fall in the value of the euro and low petrol prices, growth will surpass 1 per cent this year, and could reach 1.5 per cent – the level required to create jobs – by the end of the year.

“We will respect our commitments regarding the nominal deficit,” Valls says, referring to the 3 per cent ceiling on deficit spending. The structural reforms the European Commission would like to see, namely a complete overhaul of the labour market and pension system, will have to wait.

“We will respect a commitment to reduce the structural deficit,” he says. “But not to the detriment of growth. That’s why the most recent proposals by the EU commission aren’t going in the right direction, in my point of view. We will not adopt measures that break growth.”