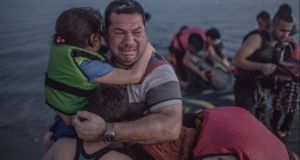 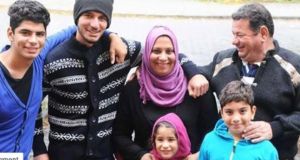 A Syrian father who was photographed in tears as he clutched his children as they arrived at a Greek island three weeks ago has reached Berlin, according to a German tabloid.

The photograph, taken on August 16th on Kos, showed Laith Majid crying as he held his seven-year-old daughter Nour in one arm and hugging his son Taha (9) with the other, as they emerged off a flimsy boat that had taken them from Turkey.

Bild now says the family, including Majid’s wife Neda and two other sons Mustafa and Ahmed, are now being accommodated in an old barracks in Spandau, in the western part of the German capital.

The barracks has served as a refugee reception centre since late August.

They made it to Germany.. To a new life and new beginnings. #Syria

After reaching Athens, the family made its way to Germany inside a truck, Bild said.

A photograph showing the five members of the family all smiling was posted on the “Europe says OXI” page on Facebook.

The caption read: “They made it to Germany . . . To a new life and new beginnings. #Syria”

In August, the family told Daniel Etter, the New York Times photographer whose image brought the plight of Syrian refugees landing in Greece to the world’s attention, that they had left Syria a fortnight earlier.

They said they paid $6,500 in total for the two- or three-hour trip from Turkey in a rubber raft.

After the photo went viral, “thirteen governments wanted to take us in”, Neda Majid, who worked as an English teacher in Syria, was quoted in Bild.

“We opted for Germany. We heard that there is help here, schools for the children.”