Man in the middle aims to show Spaniards the third way

As Spain goes to polls, Ciudadanos’s Albert Rivera may become kingmaker, if not PM 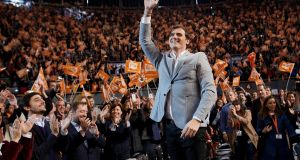 At a rally in Madrid, Albert Rivera compared himself to Barack Obama, saying: “A lot of people told him he couldn’t govern the US, but in 2008 hope defeated fear.” Photograph: Pablo Blazquez Dominguez/Getty Images

In a recent opinion piece in El País newspaper in which he presented his vision for the country, Ciudadanos (“Citizens”) leader Albert Rivera expressed admiration for three Spanish prime ministers of the modern era.

First, he praised Adolfo Suárez, a senior figure in the latter years of the Franco dictatorship, for leading the process of political transition to democracy. He then lauded the socialist Felipe González for developing the welfare state and taking Spain into the European Union. And finally, Rivera applauded José María Aznar, the conservative whose reforms made entry into the euro possible.

These were, he wrote, “three national projects, with their strengths and weaknesses, their achievements and their mistakes, but which a majority of Spaniards felt part of”.

Such a view is ammunition for Rivera’s critics, who claim he is a conservative trying to pass as a centre-ground politician – or simply an ideological magpie who cherrypicks policies. But for his supporters, that political eclecticism is evidence of his willingness to eschew left-right divisions and put Spain first.

“He should have the opportunity to show that another kind of politics is possible and that we don’t have to waste our time putting down rival politicians just because they belong to another party,” Begoña Villacis, leader of Ciudadanos in Madrid city hall, told The Irish Times.

On Sunday, voters will decide if they buy into this vision, as Rivera (36) attempts to become the seventh prime minister of Spain’s democratic era and its youngest.

Despite his youth, Rivera is not an overnight sensation. He has been a major figure on the political scene of his native Catalonia for nearly a decade, during most of which time Ciudadanos (or Ciutadans, as it was known in its Catalan incarnation) was dedicated to opposing separatism in that region. A university debating champion and water polo enthusiast who trained as a lawyer, Rivera cut his teeth as a deputy in the regional parliament.

But last year, following the sudden success of the leftist Podemos, it became clear there was a market for another new force promising political regeneration, albeit further to the right. Ciudadanos went nationwide and this year its support has soared, even overtaking Podemos in polls, with Rivera now Spain’s most popular national leader.

Much of what Ciudadanos proposes is similar, in spirit at least, to Podemos’s platform: the end of cronyism and corruption in politics and business, the introduction of transparency and the need to connect with an electorate that has become disillusioned after 3½ decades of politics dominated by the PP and socialists.

Rivera, like Pablo Iglesias (37), the Podemos leader, wants to depoliticise the judiciary and reform electoral laws.

But that’s where the similarities end between these two upstarts. The casually dressed, ponytailed Iglesias had a stint as a student in Bologna, where he got involved in anti-capitalist movements and Marxist theory. Rivera, who tends to dress with the semi-formality of an off-duty lawyer and is advised by a coach, did a course in political marketing in George Washington University.

Rivera, meanwhile, took at swipe at the redistributive agenda of Podemos, labelling it “a letter to Santa”. He describes himself as a liberal democrat and the thrust of his party’s manifesto is modernisation.

“I want a new era of deep reforms,” he told Expansión newspaper.

Many of those reforms – such as cutting back the size of the state, lowering taxes and improving the teaching of English as part of a new educational model – reinforce the notion that Rivera has been heavily influenced by an American-style market-friendly liberalism that is alien to many Spaniards. He has name-checked Canada’s new president, Justin Trudeau, and on Sunday at a rally in Madrid he compared himself to Barack Obama.

“A lot of people told him he had no experience, that he couldn’t govern the United States, but in 2008 hope defeated fear,” Rivera told 10,000 supporters in Vistalegre sports hall.

Isabel Fernández had travelled to the rally by bus from Talavera de la Reina 100km away.

“They’re fresh, they’re responsible and for once, a party wants to listen to people’s problems,” she said.

Fernández feels her home town, with an unemployment rate of 37 per cent (compared with 22 per cent nationwide), has been poorly served by this government, despite prime minister Mariano Rajoy’s claim that an economic recovery is well under way.

“Ciudadanos is a strange phenomenon compared to what is happening elsewhere in Europe: a liberal party that has emerged as a response to the economic crisis,” says political scientist Pablo Simón of Carlos III university in Madrid. “Centrist parties in Spain haven’t traditionally done well because of the electoral system.”

Declan Ganley is among Rivera’s international admirers, although the Galway-based businessman denies reports that he has been helping fund Ciudadanos. “He impressed me greatly as a smart and dynamic young guy with a vision for Catalonia and Spain within Europe,” Ganley said, adding he had had no business with the party since early 2009.

Rivera has, however, said he would not support Rajoy, inviting conjecture that he might force the prime minister to step down and make way for someone less tarnished by corruption scandals in return for the backing of Ciudadanos.

Asked by La Voz de Galicia who his bigger adversary was between Rajoy and Socialist Party leader Pedro Sánchez, Rivera gave a diplomatic but effective answer. “I think our biggest rival is abstention,” he said. “If turnout is low, if people resign themselves, if Spaniards stay at home to the extent they have done on other occasions, it’s going to be difficult to unseat the two-party system, which has run its course . . . but I’m convinced turnout will be high.”

1 Ireland in precarious position as third Covid-19 wave could be more deadly, Nphet warns
2 Man arrested over murder of mother and her two children
3 Covid crisis: Republic to move back to Level 3 as shops open from Tuesday
4 Ex-barrister Patrick Russell conned people out of more than €12m, gardaí say
5 Brexit talks: UK seeks to strip fishermen of 80% of fish caught in EU waters
Real news has value SUBSCRIBE